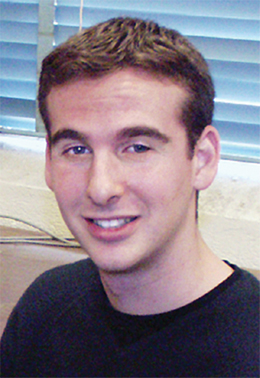 A young plasma physicist from New Jersey is the new APS Congressional Fellow for 2003-2004. Adam Rosenberg, a graduate student at the Princeton Plasma Physics Laboratory, will spend the next year broadening his congressional experience through direct involvement with the legislative and political processes.

The APS Congressional Science Fellowship program is intended to provide a public service by making individuals with scientific knowledge and skills available to members of Congress. In turn, the program enables the physicist to gain experience in the political process.

As an undergraduate, Rosenberg majored in applied and engineering physics, and in addition to his technical curriculum, he took courses in natural conservation-which fueled his interest in alternative energy sources-and American politics.

He also participated in Cornell's Engineering Co-Op Program, spending the summer of his junior year as an intern at Argonne National Laboratory to gain some hands-on research experience.

This experience clinched his decision to pursue graduate studies in plasma physics at Princeton, focusing on nuclear fusion as an alternative energy source.

For his doctoral thesis, Rosenberg decided to broaden his understanding of fusion-related plasma physics, choosing to focus on ion absorption of the high harmonic fast wave in the National Spherical Torus Experiment (NSTX), becoming the first graduate student to plan and lead experiments on this new machine. He is expected to receive his PhD in August.

In addition to his research, Rosenberg is committed to educational outreach. For two summers he taught the "tokamak" portion of Plasma Camp, a program that introduces this advanced science to high school teachers so that they may present it to their own students. He is also one of the first participants in the new Scholars in Schools program at Princeton, visiting local public schools to talk with students about his research.

He also moderates at the DOE-sponsored Science Bowl at PPPL, a competition between regional high school teams, and he answers questions sent to the lab's "Ask a Plasma Physicist" Web site. "I feel outreach is very important, because kids need to know their options," Rosenberg says. "Growing up, I never heard of what I'm studying now, and even though I ended up here anyway, it would be nice if kids could start thinking about those options sooner."

Rosenberg decided to apply for the APS Congressional Fellowship to foster his long-standing interest in politics dating back to his undergraduate years. He found time during his graduate studies and educational outreach to volunteer on the re-election campaign of Rep. Rush Holt (D-NJ). And this past January he was a member of the New Jersey delegation to Capitol Hill for the APS Convocation Lobbying Day. He also proved adept at internal organization and leadership, rallying his fellow grad students to make changes in the university plasma physics program. These experiences solidified his desire to combine his abilities and interests in the area of science policy.

In September, Rosenberg will join Congressional Fellows from other scientific societies for a special orientation sponsored by the American Association for the Advancement of Science, followed by an intensive interviewing process to decide whether he will spend his fellowship year in the office of a member of Congress, which he would prefer, or on the staff of a committee.

Although he loves scientific research, Rosenberg's year on the Hill will enable him to explore the possibility of going into science policy full-time. "I've come to realize how important science policy is, particularly for science funding and future energy needs, and I'd like to make a difference in those areas," he says.