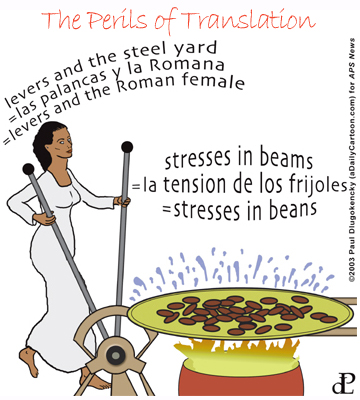 Science teachers in Latin America and Spanish-speaking educational districts in the U.S. now have an additional alternative to the standard English physics texts published in the U.S., thanks to a joint translation project of the APS and the Mexican Physical Society. This was first suggested at a meeting in Cuernavaca, Mexico in 1998 of representatives of South, Central, and North American physical societies and of the Spanish Royal Society of Physics. The new publication is called Experimentos con Hilos y Cinta Adhesiva (Experiments with String and Sticky Tape), and 2500 copies have been printed. It is a translation of "String and Sticky Tape Experiments", edited by Ron Edge and published by the American Association of Physics Teachers (AAPT).

The project was discussed by the working group on education at the Cuernavaca meeting. This group gave very high priority to the production of new teaching materials that described simple experiments that teachers could do with their students. APS Executive Officer Judy Franz, who was part of this working group, agreed that APS would work with the Mexican Physical Society to try to produce useful materials in Spanish. Franz and APS Director of Education and Outreach Fred Stein were able to obtain a grant of $25,500 from the National Science Foundation to offset the production costs and the project was underway. The Spanish and Mexican Physical Societies agreed to purchase some copies and this added resources.

Translation of the book turned out to be more difficult than expected. No electronic form of the book was available, so the text had to be scanned into a computer and then converted to pdf files before the translators could begin their work. As a result the initial electronic draft was full of errors. This made it very difficult for members of the Mexican Physical Society to carry out the translation. Stein enlisted the help of several other translators without much progress and finally persuaded Teodoro Halpern, an emeritus professor of physics at Ramapo college in New Jersey to help. He in turn recruited his great-nephew, Federico, a physics major at the college, to assist in the daunting task of essentially rewriting the translated text, and cutting and pasting the original hand-drawn illustrations into the corrected text. Federico's quality work earned him co-editor status—a nice professional credit for a young scientist starting his career.

Some of the mistakes that occurred in the midst of all these efforts were amusing. For example, the scanner misread "stresses in beams" as "stresses in beans", which was then translated into "la tension de los frijoles". And "levers and the steel yard" was translated as "las palancas y la Romana", which, when translated back into English, reads, "levers and the Roman female." Such errors are frequent in translations because of the very different natures of English and Spanish. "The flexibility you have with English is infinite," says Halpern. "You can take a noun and create from it a verb, an adjective, whatever you like. You can't do that in Spanish."

There were some grammatical errors, and many problems arose from the inevitable confusion of the plethora of local Spanish variations: each region of Central and South America has its own slang and idioms, differences between which can be addressed conversationally by simply asking for clarification. A book lacks that same interactive nature. If a second edition of the translation is published, Halpern would like to include an appendix of such idiomatic terms so that readers can look up unfamiliar terms and match them with the idioms of their region. "The concept is not to reach specific Hispanic populations in the states, but all Latin Americans as well, so the translation has to be as close to 'proper' Spanish as possible." he says. "I believe that is where the APS can make the most impact in improving physics education in Latin American countries."