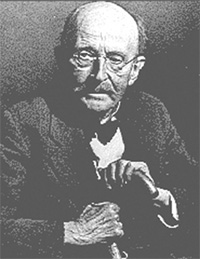 When one thinks of the pioneers of quantum physics, names such as Dirac, Einstein, Bohr, Heisenberg, and Schroedinger invariably spring to mind. However, it was Max Planck's profound insight into thermodynamics culled from his work on black body radiation that set the stage for the revolution to come. While Planck's radiation law was readily accepted, the importance of its conceptual novelty - its basis in energy quantization - took several more years to gain notice. And once it did, physics would never be the same.

Born in 1858, Planck hailed from a long line of academics. Both his grandfather and great-grandfather had been professors of theology at the University of Goettingen and his father was a professor of law at Kiel. Planck entered the University of Munich at age 16, opting to study physics. He received his doctorate at age 21 with a thesis on the second law of thermodynamics and was appointed to a teaching post at Munich, which he held until 1885, when he was appointed to a chair in Kiel. Four years later, he became chair of theoretical physics at the University of Berlin, a position he held for 38 years until his retirement in 1927.

His thesis work on the second law of thermodynamics ultimately became the basis of the research that led Planck to discover the quantum of action - now known as Planck's constant - in 1900. In late 1859, Kirchhoff had defined a black body as an object that is a perfect emitter and absorber of radiation. By the 1890s, various experimental and theoretical attempts had been made to determine its spectral energy distribution - the curve displaying how much radiant energy is emitted at different frequencies for a given temperature of the black body.

Planck was especially intrigued by the formula found in 1896 by his colleague Wilhelm Wien, and he made a series of attempts to derive "Wien's law" on the basis of the second law of thermodynamics. By October 1900, however, other colleagues had conducted additional experiments and found definite indications that Wien's law, while valid at high frequencies, broke down completely at low frequencies. So Planck went back to work. He knew that the entropy of the radiation had to depend mathematically upon its energy in the high-frequency region if Wien's law held there. He also saw what this dependence had to be in the low-frequency region in order to reproduce the experimental results there. He guessed, therefore, that he should recombine these two expressions in the simplest possible way, and thus transform the result into a formula relating the energy of the radiation to its frequency.

Planck presented this latest formulation at a meeting of the German Physical Society on October 19, 1900, which was hailed as indisputably correct. But to Planck, it was simply a "lucky guess," and he set about deriving the formulation from first principles. By December 14, 1900, he had succeeded in doing so, but only by introducing what was to prove a revolutionary concept in physics: the oscillators comprising the black body and re-emitting the radiant energy incident upon them could not absorb this energy continuously, but only in discrete amounts, or quanta of energy.

This concept of energy quanta conflicted fundamentally with all past physical theory, and its importance was not fully appreciated at first, even by Planck himself, who was something of a reluctant revolutionary. However, the evidence for its validity gradually became overwhelming as its application accounted for many discrepancies between observed phenomena and classical theory, among them Einstein's explanation of the photoelectric effect. And in 1918 Planck's fundamental contribution was recognized with the awarding of the Nobel Prize in Physics, "for the discovery of energy quanta."

Planck made no other significant discoveries of comparable importance to his 1900 work, but remained a vital figure within the scientific community, becoming one of the first prominent scientists to endorse Einstein's special theory of relativity. In his later years, Planck devoted more of his writings to philosophical, aesthetic and religious questions. He became permanent secretary of the mathematics and physics sections of the Prussian Academy of Sciences in 1912 and was also president of the Kaiser Wilhelm Society (now the Max Planck Society) from 1930-1937. Alas, his professional success was not mirrored in his personal life. His first wife died in 1909 after 22 years of marriage, and three of his four children had also died by 1919.

During World War II, Planck chose to remain in Germany to try to preserve what he could of German physics, but it proved to be a costly decision. His house in Berlin was completely destroyed by bombs, and his one remaining son was implicated in the assassination attempt on Hitler on July 20, 1944 and executed by the Gestapo in early 1945. Planck died on October 4, 1947 at the age of 89, survived by his second wife and one remaining son from that marriage.