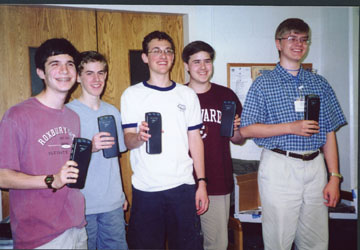 After a week of grueling physics exams, lab experiments and class-room work, five students have been selected as winners of the 2002 Physics Olympiad.

For 2002, due to concerns about international travel, the Physics Team did not compete in the international Olympiad, held this year in Indonesia. Instead, the top five team members were presented with awards and scholarships at a June 7 ceremony cosponsored by AIP, AAPT, and NASA's Office of Space Science in Washington DC.

At the awards ceremony, the students heard from astronaut John Grunsfeld and several federal officials, including Norman Neureiter, the Science and Technology Adviser to the Secretary of State. "You're not going to Indonesia this year," Neureiter said, "but you are in fact starting your trip out into a world of science, and automatically with that you're joining an international world, a world which will cross borders. And I guarantee as you go out into that world, you're going to have a lot of international experiences. Physics is perhaps the most universal of sciences today. Electrons travel with the same speed and the same spin no matter what language is spoken, no matter what borders they cross."

The Physics Team also received a 'behind-the-scenes' tour of the Smithsonian Air and Space Museum. Following the awards ceremony, students enjoyed a private viewing of "Space Shuttle 3-D" at the Museum's IMAX theater. 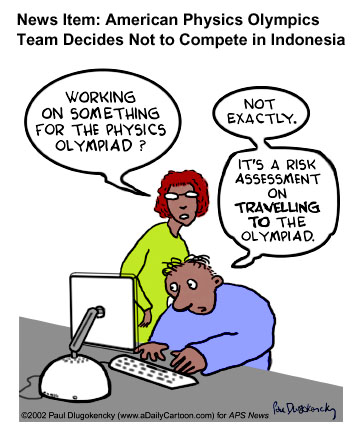