APS Lobbyists Work the Hill While Brinkman and Colwell Correspond

In response to severe cuts to core programs in the physical sciences at NSF, the APS has been working especially hard in the past few months, both within the administration and on Capitol Hill, to help turn the situation around.

APS lobbying efforts, spearheaded by Senior Science Policy Fellow Steve Pierson, focused on gaining support for a "Dear Colleague" letter in the House of Representatives, in which members of Congress asked their colleagues on the relevant appropriations committee to raise the NSF budget by 15% this year. By calling more than 160 Congressional offices, and personally visiting more than 75, Pierson and others in the APS Washington office led the effort that ultimately resulted in 131 members signing the letter. The appropriation for NSF will not be passed for another month or two, but in a related development, on June 5 the House overwhelmingly passed a bill that authorized a 15% increase for NSF for each of the next 3 years. [Authorization bills set policy and priorities, but the actual budget numbers are determined by the appropriation bills].

Meanwhile, on April 30, APS President Bill Brinkman wrote to NSF Director Rita R. Colwell, noting the support that APS has traditionally given the NSF. He pointed out that, in addition to its direct lobbying activity, last year APS helped with more than 2,500 letters to Congress from physicists on behalf of NSF, and this year that total has already been surpassed. Brinkman went on to detail the cuts that NSF- supported research groups had suffered, citing as examples the 23% cut that the University of Chicago particle physics group received, and 11% at Michigan State. "I strongly urge you to work toward increasing the physical sciences budget in the next years if some of the increases that you are hoping for are realized," he told the NSF Director.

Colwell replied in a letter to Brinkman dated May 28. The text of her letter is below. 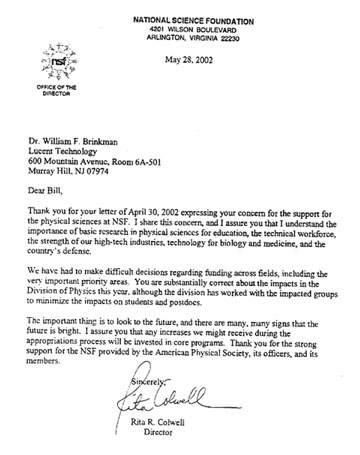