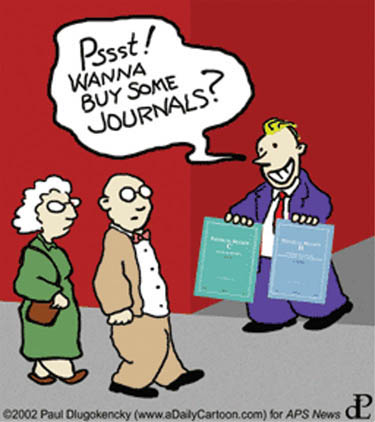 A Los Angeles-based journal subscription service has settled out of court to avoid a civil lawsuit by the APS, the American Institute of Physics, and two other scientific societies, alleging fraudulent business practices. Eastwood Books was alleged to have filed false society membership applications in order to obtain multiple subscriptions of scientific journals at the lower individual member rates.

The company also allegedly filed overlapping false claims for "missing" issues to assemble full sets of journals, subsequently selling them to institutions overseas at rates as high as 10 times that of the individual membership rates. AIP, like APS, sells scientific journals at higher institutional subscription rates to companies, libraries and universities, while offering lower rates to individual scientists and researcher with society membership.

About 40 scientific societies were informed by a blanket email of Eastwood's resale of individual journal subscriptions to institutions, but it was AIP Executive Director Marc Brodsky who first took it seriously and approached the APS and other affected scientific societies about taking possible action. The APS, AIP, American Chemical Society and the IEEE approached Eastwood, eventually settling out of court for $250,000, which was received last December and divided among the four societies and other AIP member societies which had provided helpful subscription data.

Under the terms of the settlement, Eastwood Books, which did not admit any wrongdoing, has agreed not to place further subscription orders except at institutional rates, and has agreed to give the societies information about its subscription and distribution practices, which the societies hope will help them identify and bill Eastwood's overseas customers.

According to APS treasurer Tom McIlrath, the APS eventually identified nearly a dozen individuals who defrauded the society by passing their journal copies to Eastwood, and ordering replacement copies to assemble completed sets. Neither the APS nor AIP has actively searched for patterns of abuse of its journal subscription practices in the past, preferring to focus on serving its members rather than chasing down potential abusers. However, it is believed that the conversion to electronic publishing will eventually allow greater control over journal distribution and help to prevent further incidents of fraud.

"We hope this settlement has put a stop to activities that ultimately would deprive our legitimate individual members, our library customers who pay full and fair rates, and the entire scientific community of the full benefit of the exchange of scientific ideas presented in our journals," Brodsky said when the lawsuit settlement was announced in early April. "We also hope that this will discourage others from considering similar tactics, which we now will keep watch for and vigorously pursue.

"While the civil suit has been avoided, a criminal investigation involving Eastwood Books is still ongoing, according to Detective Michael Yang of the Los Angeles Police Department, which conducted an warrant search of Eastwood's premises in Los Angeles. Detective Yang said he has no evidence that this investigation will lead to a larger organized effort to illegally sell scientific journals to underdeveloped regions, but can't completely rule out the possibility. However, "not everyone reads these journals," he cautioned. "You've got a select group of people and a selected market for it. So for somebody to defraud this type of organization, it's not something we see every day."