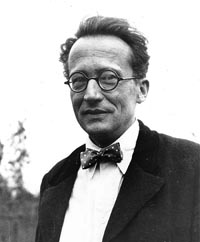 Austrian born theoretical physicist Erwin Schroedinger made profound contributions to quantum theory with the formulation of the wave equation that bears his name. But ironically, his most famous work is a 1935 thought experiment that has piqued the interest of philosophers and appalled cat lovers ever since: the paradox of Schroedinger's cat.

Schroedinger was born in 1887 in Vienna, Austria, the son of the owner of a small linoleum factory. He was schooled at home until he was 10, at which time he entered the Akademisches Gymnasium, quickly demonstrating superior proficiency in physics and mathematics. A former classmate recalls that the young Schroedinger comprehended material presented during class so well that immediately following the lecture, he was able to go to the blackboard and begin solving problems with playful facility. He graduated in 1906 and entered the University of Vienna, where he studied theoretical physics. He was awarded his doctorate in 1910 with a dissertation on the conduction of electricity on the surface of insulators in moist air.

After a brief stint of voluntary military service, Schroedinger was appointed to an assistantship at Vienna in experimental physics, where he worked on radioactivity, proving the statistical nature of radioactive decay. He later cited his experimental work as an invaluable asset to his theoretical work. His academic career was interrupted briefly by the outbreak of World War I, but he made substantial contributions to color theory and published his first results on quantum theory in 1917.

Schroedinger then became chair of theoretical physics at the University of Zurich, which is where he made his most important contributions. His papers at that time dealt with specific heats of solids, with problems of thermodynamics, and of atomic spectra; in addition, he indulged in physiological studies of colour. His great discovery, Schroedinger's wave equation, was made during the first half of 1926, as a result of his dissatisfaction with the quantum condition in the Bohr's theory of the atom and his belief that atomic spectra should really be determined by some kind of eigenvalue problem. For this work he shared with Dirac the Nobel Prize in 1933.

In was early in 1935 that Schroedinger began to develop the concepts underlying his famous feline paradox, with the first of a three-part essay published in the spring. It contained a pivotal thought experiment to illustrate one of the predominant contradictions between quantum theory and our experiences in reality: put a cat inside a box, add a container of poison gas, which is activated by the decay of a radioactive atom, and close the box. Schroedinger used the analogy to demonstrate the limitations of quantum mechanics: quantum particles such as atoms can be in two or more different quantum states at the same time, but surely, he argued, a classical object made of a large number of atoms, such as a cat, should not be in two different states.

The radioactive atom has a 50% probability of decaying within one hour, and if this occurs, the vial of cyanide will be broken and the cat will be killed; if not, then no cyanide is released and the cat will live. The radioactive atom obeys the rules of quantum mechanics, and since its state is indeterminate until measured by an outside observer, opening the box and observing the atom inside instantly determines the status of the cat. The beleaguered feline is neither alive nor dead until the radioactive atom is measured by an observer. So during the period before the lid is open, the cat exists in two superposed states: both dead and alive.

While the thought experiment is impossible to carry out for a number of reasons - including the fact that the quantum properties of a system tend to wash out in an object made of many atoms and molecules, such as a cat - the basic underlying principles were finally experimentally demonstrated just a few years ago. In 1996, four researchers at the National Institute of Standards and Technology (NIST) in Boulder, CO, carried out the "Schroedinger's Cat" test using not a live feline, but a positively charged ion (i.e., a "cation") of beryllium.

The group confined a charged beryllium atom into a tiny electromagnetic cage, then cooled it with a laser to its lowest energy state so that its position and spin could be determined to a very high degree of accuracy. The workers then stimulated the atom with a laser such that it now had a 50% probability of being in a "spin up" state in its initial position, and an equal probability of being in a "spin down" state in a position about 80 nm away. In effect, the atom was in two different places, as well as two different spin states, at the same time - the atomic equivalent of having a cat both living and dead. The clinching evidence was their observation of an interference pattern, a telltale sign that a single beryllium atom produced two distinct wave functions that interfered with each other.