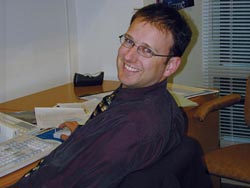 As part of its continued effort to communicate physics research to the general public, the APS has appointed David Harris to be the new Head of Media Relations.

The media relations position was first created on the recommendation of the APS Task Force on Informing the Public in 1999. Randy Atkins, now at the National Academy of Engineering, held the position from 1999 to 2001.

Since 1997, Harris has presented a weekly science radio program for the Australian Broadcasting Corporation including a popular question and answer component in which listeners would attempt to stump him with queries about the scientific world. He also provided reports for Radio Australia, an internationally broadcast station.

Having written extensively online, Harris has been employed as About, Inc.'s physics specialist since 2000. He still maintains one of the most-visited physics sites on the web at physics.about.com.

When a commercial television network was planning a children's science program, Harris was called on to research, write and co-produce the 65-episode series Y?, now in its fourth series. Recently, he has been working as a journalist and public information officer for the University of Queensland identifying, reporting on and pitching science stories for the Australian and international media.

"David came for an interview at APS just before September 11, and was stranded for several days until he could get a flight back home," said Alan Chodos, APS Associate Executive Officer. "We were afraid that after that experience he might just decide to stay in Australia. We're delighted that he accepted our offer, because, with his background and his skills he's the perfect person for the job."

Harris's focus at the APS will be to foster physics coverage in national and international media, extending the usual reach of physics stories. He will also contribute to APS education, outreach and policy activities.

"There is great public interest in physics research despite its specialty nature and, as physicists, we need to be open to new possibilities for communicating our work to new audiences," said Harris. He has already had some success in convincing publications that have no regular science content to include physics-related stories.

Harris sees his work as that of an intermediary who can make communication between physicists and the media simpler and more efficient.

"One of the greatest impediments to communication between physicists and journalists is lack of time. Journalists often don't have the time to learn all the background to a story and physicists often don't have time to walk a journalist through a new result. A key function of media relations is to ensure that sufficient accurate information is communicated in an appropriate manner without the process getting bogged down in unnecessary details."

In some cases, communication difficulties arise from the very different ways in which physicists and journalists work. Having been in both situations, Harris is in a good position to ensure that everybody involved in the development of a story gets the assistance they need in the manner best suited to them.

Harris will work closely with the AIP Media and Government Relations team to engineer broad and effective coverage of all types of physics and physical science stories.