The Role of Science in the National War on Terrorism 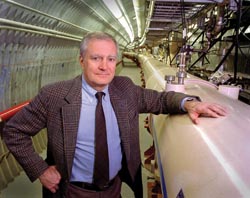 Recently there have been murmured concerns in the scientific community about the Bush Administration's level of interest in science, and the value it places on federal investment in science and technology to stimulate a flagging American economy in the wake of the tragic events of the September 11 terrorist attacks.

I can assure you that this administration is determined not to let terrorism deflect America from its trajectory of world leadership in science. Our nation's prowess in technology, especially information technology and instrumentation, have opened extraordinary new vistas in science. It has made it possible to visualize and manipulate matter on the atomic scale, leading to unprecedented understanding and control of the processes of life as well as of inanimate matter. Having produced the means for great strides in science, and in accompanying technologies for improved health care, economic competitiveness, and quality of life, it would be foolish to turn aside now from the course of discovery while we engage the monster of terrorism - an evil force that denies the benefits of progress and the search for truth.

Thus I expect that science in America and the world will forge ahead relatively unaffected by the war against terrorism. I expect the President's prior commitment to increase funding for health related research to be realized. I expect the tremendous momentum in the information sciences to roll forward. I expect the technologies of measurement and analysis - atomic scale microscopy and manipulation, light sources, probes, detectors and analyzers - to continue to win new ground on the frontiers of complexity as well as of scale. Science has its own intrinsic imperative and this nation will continue to pursue it.

This administration is equally determined to win the war against terrorism, and President Bush is mobilizing all the talents and resources of our immensely strong society to that end. He is doing this through the conventional mechanisms of American government, and he is drawing upon much previous work that prepared us for this struggle. It is too easy to criticize - after the fact - a prosperous peace-time nation for unpreparedness in the face of danger. A better criterion for defensive health would be the speed with which a nation under attack can respond effectively. There is no question that the steps New York took after the first world Trade Center attack in 1993 saved numerous lives in the second attack eight years later, and expedited a response that limited the scope of its evil consequences. Nor is there doubt that lessons learned from attacks on US embassies and federal buildings limited the damage to the Pentagon, portions of which had been remodeled with designs based upon these lessons.

Our consciousness of the biowarfare work of troubled regimes elsewhere in the world had led to studies of biodefenses and to exercises designed to teach us where our greatest vulnerabilities lay before September 11. Many of the means required for a war against terrorism were already available to us, and only needed to be enlisted in a systematic way to support the effort. This readiness is most visible in the technologies now in play in the war beyond our borders. But significant readiness of homeland technology is also apparent, though not yet fully mobilized. We are not starting "from scratch" in the technology of homeland defense. We have much relevant technology, and the challenge is to deploy it effectively.

Prior to World War II, science had reached a monumental turning point. Quantum physics had flung open the gates to a staggering vista of opportunity that was not to be realized until after the war. Our understanding of chemistry, of materials, of nuclear phenomena, of optical properties, of the processes of life, began to expand at an explosive rate. The wartime scientific effort labored urgently to apply this new capability to applications of the highest leverage for military operations, such as radar and nuclear weapons.

Prior to the war on terrorism, the modern era of science had matured, and a wealth of knowledge and technique now lies at hand. In nearly every area where technology can be applied to homeland defense, the basic knowledge exists, and the need is for engineering to turn known phenomena into devices, and to embed the devices into practical systems. The single greatest exception to this rule is in the response to bioterrorism, where additional research is needed on the mechanisms of diseases likely to be exploited by terrorists.

Some have spoken of the need for a "Manhattan Project" to satisfy the needs of homeland security. The analogy is wrong-headed. Cleverness is needed less now than a national will to use what we have to strengthen the infrastructure of our daily lives, to bolster public health systems, to equip properly our first responders, to use more effectively the information technology, the detection technology, the biotechnology that we already possess to render the way we live less vulnerable to what the military scholars call "asymmetric threats." We need to plan, and to carry out our plans. And that is one of the functions of the Office of Homeland Security, created by President Bush in the aftermath of September 11, and headed by Pennsylvania Governor Tom Ridge.

For several years the federal government has been concerned that such attacks might occur. For decades the Departments of Defense, Health and Human Services, Energy and Agriculture have engaged in anti-terrorism activities that have contributed to the protection of our Homeland and the creation of technologies which have benefitted our everyday security and existence. The attacks of September 11 forced us to view all these preparations in a new light. How do we think systematically about this new kind of war?

When President Bush introduced the notion of a War Against Terrorism, my first thought was how a map for such a war would differ from a conventional battle map. Conventional wars are fought for territory, easily measured on a chart with latitude and longitude, but the fronts in the war against terrorism cover multiple dimensions. How can we detect an unprotected flank in this complex territory? How do we measure progress? We need a taxonomy and a common language to assess threats, avoid duplication, and facilitate interagency cooperation and coordination.

OSTP has executive and legislative mandates to coordinate federal science and technology activities, and is consequently in a position to call on organizations, internal and external to the federal government, as we provide support to the Office of Homeland Security, and other offices responsible for aspects of the war on terrorism. We have been focusing our energies on short- term issues such as mail security, baggage screening, and civilian preparedness. But we are also taking steps to identify long-term S&T opportunities that will help the US win the war against terrorism.

So, how can science help? Science and engineering have critical roles to play in the war on terrorism. We need improved tools with which to prevent, detect, protect, and treat victims of chemical, biological, radiological, nuclear, and conventional terrorist attacks. Additionally, we will need new and improved tools to recover facilities from those same types of attacks, should they ever occur. Many cases call for a "systems approach," rather than simply perfection of a single device.

In late October 2001, Director Ridge asked that OSTP provide technical support for the treatment of US mail potentially contaminated by Bacillus anthracis. This led to an interagency technical team that, within days, began evaluating the irradiation facilities at Lima, Ohio, and Bridgeport, New Jersey. By mid- November, with strong scientific data on the use of electron beam technology to irradiate the mail and the establishment of sound standard operating procedures, I endorsed an advisory to the US Postal Service that the procedures being used were able to rid the mail of Bacillus contamination. We continue to work with this scientific team to refine the irradiation process and to explore other available technologies to rid the mail of potential pathogens.

An example where a systems approach is needed is airline security. Right now, our chief tool is the transmission X-ray. Other technologies can significantly improve our capabilities to detect weapons of terror, develop these detection technologies for rapid deployment, and think carefully how to integrate the ones adopted, as a coherent package, into airline routines. We must do this in such a way that they not create unpleasant delays and unaffordable expenses, but do enhance both security and passenger confidence. Potential technologies range from dogs that can sniff out explosives to computer-based biometrics to resonant gamma ray imaging of concealed explosives, and laser interrogation of trace compounds.

Fire was critical in the collapse of the World Trade Center buildings and contributed to damage to the Pentagon buildings, but current building design practice does not consider fire as a design requirement. Current emergency response procedures could not adequately cope with the events in those buildings. Buildings today are not immune from chemical, biological, and radiological threats. Efforts are underway to protect military buildings through DARPA's "immune building" program, but there are no standards and practices or civilian buildings. Prior to 9/11 the Corps of Engineers helped design several modifications to the Pentagon as part of a completed renovation. Analysis of past attacks, data from experimental detonations and super computer simulations led to structural hardening innovations including a strong steel support matrix, a Kevlar wrap to contain shrapnel-like fragments, and blast resistant windows. That work saved many lives.

Let me turn now to the more delicate subject of how the war on terrorism, and the fear of terrorism, may impact the conduct of science. Increased security measures are, of course, helpful if they actually decrease the chances that unauthorized people will gain access to classified material, and they do not adversely impact the missions of those implementing the measures. Security measures implemented without adequate forethought can backfire if they do not significantly improve security and have a negative impact on science and agency missions. We need to identify systematically where additional security measures are needed and develop thoughtful responses sensitive to the importance of activities they might impede.

Many people come from around the world to study in US undergraduate and graduate programs. Some come from the same countries that we believe generate terrorists. It is important that international students continue to come to the US to study and contribute to our science and technology enterprise. They are a major factor in our nation's world scientific leadership. They also learn to appreciate the advantages of our educational system and acquire skills that will enable them to contribute quality of life in their own countries. But we do need better ways of identifying the few that come to enhance their effectiveness as terrorists. We are currently grappling with what new measures should be introduced, both to identify terrorists before they receive visas, and to identify potential terrorists by their activities after they come to the US

Finally, our nation today is a science superpower. The scope of our scientific activity, both basic and applied, is breathtaking and unmatched. We are not, however, a science monopoly, and we have much to learn from colleagues elsewhere in the world. Science thrives on open discourse. Measures that inhibit discourse will impede progress. We cannot limit scientific interactions with other nations without paying a scientific price.

John Marburger is the newly appointed presidential science advisor and head of the White House Office of Science and Technology Policy. The above is adapted from his speech at a December 18, 2001, symposium on the war on terrorism sponsored by the American Association for the Advancement of Science.