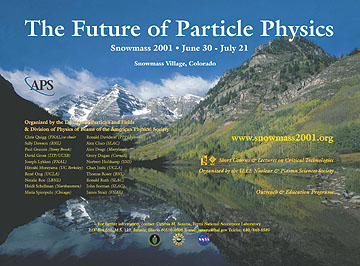 The Snowmass Village ski resort in the Colorado Rockies just outside Aspen is the setting for a major get-together of the particle physics community that runs for three weeks from June 30 - July 21 this summer.

The Snowmass 2001 conference, formally dubbed the Summer Study on the Future of Particle Physics, is designed to be a comprehensive assessment of the current state of particle physics, as well as a detailed discussion of where the field should go over the next 20 years. It is being organized by the APS Division of Particles and Fields (DPF) and the Division of Physics of Beams (DPB).

"The goal is to assess where particle physics is now and where it wants to go," said Chris Quigg, one of two co-chairs of the organizing committee and a physicist at Fermi National Accelerator Laboratory.

Watching the proceedings closely will be the US Government - whose money supports most high-energy physics research - through the High Energy Physics Advisory Panel.

Known by its acronym HEPAP, the 15-to-20 person committee has served as the main advisory panel to the government for over 30 years on all matters relating to high-energy physics. HEPAP, in turn, will keep tabs on the conference through a 24-member Sub-panel on Long Range Planning for US High Energy Physics.

"Our charge is to make a plan for the US high-energy physics program over the next 20 years," said Jonathan Bagger of Johns Hopkins University. Bagger is co-chairing the sub-panel with Barry Barish of Caltech.

At Snowmass, the long-range sub-panel members will join scientists from universities and the ten largest high-energy physics laboratories as part of the comprehensive assessment of where the field of particle physics is and where it ought to go.

Quigg, who is also the DPF chair, said an important aim of the conference is to bring the theoretical side of the field together with the experimental side so that, for example, string theorists can bring their "vision" to the experimentalists.

"There is a real effort to draw those people into Snowmass for the benefits to both sides," Quigg said. "They (string theorists) have the longest vision of what particle physics might become, what the ultimate narrative might be."

"It is important for all of us and especially the people planning experiments to have these visions in mind. And in the other direction, it won't be harmful for young string theorists to rub shoulders with experimenters and other theorists who work more closely with experiment," Quigg said.

The original estimate of 500 attendees had grown to over 600 just before Memorial Day, and Quigg estimated Snowmass Village could probably accommodate up to 800 people.

Ronald Davidson, the other organizing committee co-chair and chair of the DPB, said the conference will recognize various communities, within particle physics and beam physics.

"It's a rather large amalgamation of folks from the two divisions of APS," said Davidson, who was director of Princeton University's Plasma Physics Laboratory from 1991-1996.

Bagger said his group's aims dovetail with those of the conference. "Our report is supposed to be science-driven, so we have a wonderfully broad charge," he said. "And we start by asking 'What is particle physics? What will it be in 20 years? What tools do we need to access the science? What R&D do we need to prepare the tools?' These are the same questions that Snowmass is looking at."

He said he hopes the particle physics community and his sub-panel "converge on a similar set of recommendations," adding that his group is "working in the context of the larger community."

Peter Rosen, head of the Department of Energy's Office of High Energy and Nuclear Physics, said the sub-panel's report will provide a "road-map" of the decisions regarding the direction the particle physics field decides at the conference.

"The sub-panel will be at the conference," said Rosen. "The recommendations are due by the end of October. They will send their report to HEPAP, which will consider the report and will either endorse it, or if they have some questions, send it back to the sub-panel with some further questions."

Rosen said HEPAP's final recommendations will then be used by his agency to determine what sort of research to fund and what kind of machines, if any, should be built once the Large Hadron Collider (LHC), at the CERN laboratory in Switzerland, becomes operational.

"Right now the energy frontier in high energy physics is the Tevatron, located at Fermilab in Illinois. That is the highest energy machine in the world. But when the LHC comes on, that will be seven times the energy.and the question in front of the high energy physics community over here is where do they see the field going after LHC?"

The Office of High Energy and Nuclear Physics, which is within the Department of Energy's Office of Science, this year alone will provide about $700 million to fund high-energy physics research as well as $350 million for nuclear physics research.

"Our office supports about 90 percent of the government-funded high-energy physics research in the US," Rosen said.

The National Science Foundation provides between $50 million to $80 million annually in funding to high-energy physics research.

As for the conference, Quigg said it is designed to be a "three week scientific workshop" that will include 27 working groups. Among these are five physics groups, seven experiment groups, nine technology groups, and six machine/accelerator groups.

Also included is a "Science Weekend" on July 7-8 that is billed as an "extravaganza of activities for people of all ages who are curious about the world they live in," according to the Snowmass conference web site (snowmass2001.org).

Quigg said the weekend event is designed to be "a huge exercise in public outreach of various sorts" by the particle physics community that will feature "a cast of many hundreds, perhaps thousands."