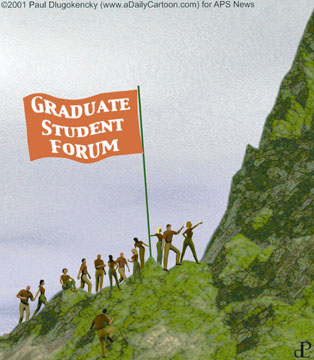 Citing the need to reach out more to its graduate student members, the APS Council approved the formation of a new Forum on Graduate Student Affairs (FGSA) at its April meeting in Washington, DC. The new forum is intended to enhance the Society's ability to meet the needs of physics graduate students, and to provide an opportunity for their increased involvement and discussion with the greater physics community.

Providing initial leadership for the FGSA will be interim chair Susan Niebur of Washington University in St. Louis.

"We are the next generation of physicists, and hence we need to communicate and work together with older physicists," says Jennifer Rittenhouse West, a graduate student at the University of California, Santa Barbara and another organizer of the Forum. "Needs change over the years, and we need a society that is responsive to those changes. We also need a strong membership, which can best be accomplished by recruiting the youngest members of our profession and getting them involved early on in the Society's affairs."

The roots of the fledgling FGSA date back to the formation of a task force on graduate student affairs appointed by APS Executive Officer Judy Franz, whose members were culled from a list of volunteers. All of the discussion occurred via e-mail, and ultimately it was decided that a new forum was needed. Task force members identified three primary objectives: (1) enhance the Society's ability to meet the needs of physics graduate students; (2) offer them support services; and (3) provide them with an opportunity for increased inclusion and participation in the activities and decision-making of the physics community.

According to West, when the existing APS forums were notified of the petition to establish the FGSA, the response was mostly favorable. However, concern was expressed about possible overlap in objectives, particularly with the Forum on Education (FED) and with the APS Committee on Careers and Professional Development (CCPD). There was also some concern that the new forum might discourage active participation of students in other units.

West points out that past FED meetings and news letters have not focused much on graduate education, and the CCPD doesn't deal with education issues. Furthermore, "The forum is a wonderful avenue for improving communication between senior and junior members of the APS, and makes the dispersion of information so much easier," she says.

She adds that the forum desires to work closely with all the existing APS units, not take over any one's area of interest. As for drawing students away from other forums, most graduate students aren't even aware that such units exist. West herself just joined the FPS, which she heard about through her work on the task force, "so I don't think [other units] need to worry about their membership going down."