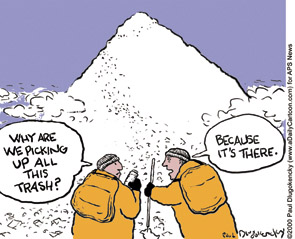 Physicists often dream of making an indelible mark on their field with brilliant, groundbreaking research, but Francis Slakey, the APS associate director of public affairs and an adjunct physics professor at Georgetown University, recently made a different kind of mark when he summited the world's highest mountain peak in May: Mount Everest, with an elevation of 29,035 feet. Slakey made the excursion as part of the Everest Environmental Expedition, a not-for-profit climbing team whose mission, apart from the climb itself, was to make a significant cleanup of discarded oxygen bottles and other debris that has accumulated at the high base camps over the years since Sir Edmund Hillary and Tenzing Norgay first attained the summit back in 1953.

Unlike the many guided commercial expeditions that cater to the whims of wealthy and frequently inexperienced climbers, the cleanup expedition was unguided, and comprised of highly experienced climbers with decades of experience between them. [Slakey himself has been an avid rock and mountain climber for the last 10 years, having climbed the highest peaks in Europe, Africa, and the Americas.] Jamling Tenzing Norgay, star of the popular IMAX Everest film, served as the official trekking team leader, while Apa Sherpa, who holds the world record for most summits (11) of Everest, served as lead Sherpa.

The expedition's cleanup efforts focused on the climbing route along the Southeast Ridge, used by Hillary and the most popular path to the summit. To help climbers acclimatize to the extreme gains in elevation, four base camps - in addition to the Everest Base Camp located on the Khumbu Glacier at 17,600 feet - are set up at key points along the route to allow the team to climb and sleep progressively higher on the mountain. The cleanup focused on Base Camp II, at 21,300 feet, which is littered with discarded tents, medical waste, plastic packaging and tin cans, and Base Camp III, perched precariously on the Lhotse Face at 24,000 feet, which is littered with shredded tents and other climbing equipment abandoned by previous expeditions.

However, it is Camp IV, at 26,000 feet, that has the dubious distinction of being dubbed "the world's highest garbage dump," strewn with as many as 1,000 empty oxygen bottles, spent fuel canisters, batteries, shredded tents and other discarded equipment. "Because of the harsh conditions, climbers scramble to get off the mountain, and this often means they leave equipment behind," says Slakey. Two previous cleanup expeditions in 1995 and 1998 recovered over 300 oxygen bottles and removed more than a ton of debris from the mountain. This expedition's cleanup crew - comprised primarily of Sherpas - recovered nearly 700 oxygen bottles from the South Col at Camp IV, and removed a half ton of trash from Camp II.

Prior to the actual climb, Slakey and many of his fellow team members met with numerous religious leaders in this predominantly Buddhist region for blessings and charms to ensure the climbers' safety, including a memorable audience with the "Most Holy Rimpoche of the Khumbu," the Nepalese equivalent of the Dalai Lama. Despite being an avowed atheist, Slakey took advantage of the opportunity to ask the Rimpoche for more personal words of wisdom to sustain him on the climb. His request was duly translated, and the Rimpoche responded: I'll get back to you. "He gave me the brush off," says Slakey, expecting to hear nothing further from the holy man.

But later that afternoon, a young messenger delivered Slakey an amulet inscribed in Tibetan characters - a tremendous honor, according to the natives at base camp. The catch: the inscription was written in an ancient form of Tibetan, and no living person can translate it, including the Rimpoche himself. "So I've got the meaning of life in my hand, and no one has a clue what it says," says Slakey.

Mount Everest has been the subject of increased controversy and debate since the publication of "Into Thin Air," journalist Jon Krakauer's account of the 1996 season that claimed the lives of twelve climbers. The mountain's harsh conditions proved no less dangerous this season - Nepalese officials identified it as the worst weather on record. Many climbers abandoned their ascent due to frostbite, intestinal bugs, altitude sickness, and the like. But after weeks of unstable weather and a highly unpredictable jet stream with winds of 150 MPH at the peak, Slakey and two of his fellow team members grabbed the last possible window of opportunity to make the final push for the summit. The gamble paid off: on May 24, at 10:51am, Slakey stood at the top of the world, albeit buffeted by powerful winds, before beginning the slow descent back to Base Camp IV.

After the hardships of their seven weeks on the slopes of Everest, the expedition unwound at Namche Bazar, a village about four days' trek from Everest Base Camp, where the climbers dined on yak steaks and local hooch, and celebrated to the strains of Santana and the Red Hot Chili Peppers into the wee hours of the morning. Just prior to departing for home via Kathmandu, the team members received a statement of appreciation for their cleanup efforts from the Sagarmatha Pollution Control Committee. In addition, an onsite documentary crew filmed more than 100 hours of footage during the course of the expedition that will eventually be edited down and condensed into a one-hour television special, to air later this year.

Slakey is once again safely ensconced in the Washington office, with just the merest hint of frostbite, and has turned his attention from climbing to such policy issues as ballistic missile defense and climate change. Apart from the immense personal satisfaction of having accomplished a feat that few people on the planet will even have the opportunity to attempt, Slakey returned with a more concrete memento: one of the oxygen bottles used by Sir Edmund Hillary on his historic first ascent in 1953, identifiable by its serial number.