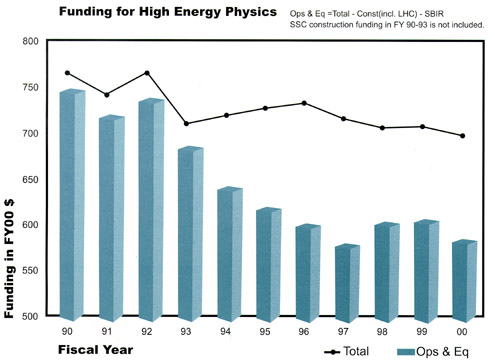 Like a spring that can be stretched only so far and still bounce back, the U.S. High Energy Physics program has reached the limit of budget stretching before irrevocable changes threaten its capacity for world-leading science. That was the message that members of the Department of Energy's High Energy Physics Advisory Panel heard from speaker after speaker at HEPAP's spring meeting, held at Fermilab on March 9 and 10.

Paradoxically, at a time when long-straitened budgets for basic science in the United States are facing the best funding prospects in many years, the budgets for high-energy physics laboratories, already eroded by a decade of inflationary effects, took a downturn in the President's Budget Request for Fiscal Year 2001. The situation is particularly troubling, DOE and laboratory officials told the panel, because both Fermilab and SLAC are poised to begin using brand-new, multimillion-dollar facilities to carry out physics experiments whose potential for discovery is unsurpassed in the world.

"We have a fifty million dollar problem," said DOE's John O'Fallon, director of the Division of High Energy Physics. "In FY2001, Fermilab has a $33 million problem and SLAC has a $15 million problem. Now, we have to fix it."

O'Fallon, Fermilab Director Michael Witherell and SLAC Director Jonathan Dorfan all showed HEPAP members the same graphic illustration of the course of high-energy physics funding over the past decade.

The chart, which appears at right, shows a $180 million decline in annual funding for operations and equipment for high-energy physics at DOE from 1990 until the present year, using current-year dollars and totals supplied by DOE's Division of High-Energy Physics. These are the funds required to utilize the investment in physics facilities. Fermilab's Witherell explained that the inflation index used to calculate yearly levels almost certainly underestimates the real inflation rate that high-tech organizations have typically faced in recent years. The "Operations and Equipment" line results from subtracting construction funds, including funding for the U.S. contribution to the Large Hadron Collider at CERN, from the total. The low level of construction funding in the years 1990-1993 occurred because the construction funding for the Superconducting Super Collider laboratory, now terminated, is not included in the total.

Witherell described progress on the NuMI/MINOS project, which will send a high-intensity beam of neutrinos from Fermilab's Main Injector to a particle detector in northern Minnesota to search for evidence of oscillation from one neutrino flavor to another. He said the neutrino experiment was "the most sensitive" to the impact of proposed FY2001 funding cuts, and that the resulting delay "would significantly reduce the impact of the experiments."

SLAC's Dorfan told panel members of the excellent performance of the laboratory's new B Factory and BaBar detector, whose current physics run began in mid-January, 2000, and will continue through August. He said SLAC has set an ambitious luminosity goal of 12 inverse femtobarns, to break new ground in the understanding of the matterantimatter asymmetry known as CP violation.

"If we don't improve the budget for FY200l," Dorfan said, "something will be irrevocably reset in this field. You don't recover from something like this in a year. Congress funded the B Factory at SLAC and the Main Injector at Fermilab. They did their job. And we did our job: we built them on time and on budget. Now we are ready to use them. Congress doesn't want to throw that away."

"We have successfully completed accelerator upgrade projects that renewed our research program without a very large new accelerator facility," Witherell said. "We are now trying to take advantage of the scientific opportunities made available by the new accelerator complexes, but the funding level is not sufficient to do that."

Between a 20 percent cut in the base budget for the laboratories since 1992 and a five-plus percent inflation rate, driven by rising salaries for valuable scientific and technical staff, the laboratories are in real trouble, Witherell said.

"The staffs are too thin to operate the facilities, build the experiments and prepare for the future. Scheduled projects are not getting the funding they need to stay on schedule. The funding at SLAC is bad. The budget at Fermilab is even worse, worse than at any time in memory," he said.

As one way to address the overall funding challenge, DOE's Peter Rosen, Associate Director for High Energy and Nuclear Physics, requested that HEPAP review the 1997 Gilman Subpanel "Report on the Future of High-Energy Physics" and provide updated interim guidance on the direction of the field.

"Some think that the high-energy physics community has no clear idea where it's going," Rosen said. "We must formulate a national plan, with expenditures, timelines and road maps for the three proposed new facilities at the energy frontier and for the muon storage ring at the intensity frontier. This is an important step in developing an adequate budget."