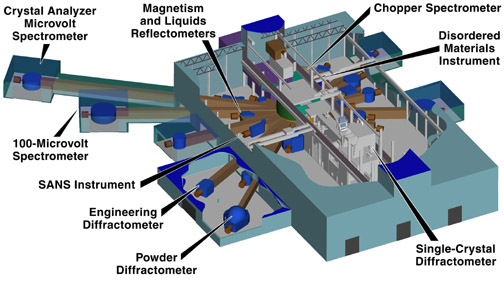 Schematic instrument suite for the SNS. Already on the drawing board are the crystal analyzer microvolt spectrometer (top left) and magnetism and liquids reflectometers (top middle). The final instrumentation will be determined by the user community through the SNS Instrument Oversight Committee.

One of the three accelerators making up the linac at the Spallation Neutron Source, now under construction at Oak Ridge National Laboratory, will consist of superconducting niobium rf cavities, cooled with liquid helium to an operating temperature of 2K. This part of the linac will perform the final stage of acceleration of the negative ions, from about 200 MeV to 1 GeV. Superconducting rf technology is expected to be the technology of choice for many future accelerators, and will enhance the capabilities and longevity of the SNS.

Construction of the Spallation Neutron Source (SNS) facility began on December 15, 1999, with groundbreaking at the Oak Ridge, Tennessee site. At a cost of $1.4B, the SNS is scheduled for completion in 2006. The project is funded by the U.S. Department of Energy (DOE) Office of Science and is being designed and constructed by a partnership of six DOE national laboratories (Argonne, Brookhaven, Jefferson, Lawrence Berkeley, Los Alamos, and Oak Ridge), which is unique for such a large-scale facility. When the SNS is complete, it will be the most powerful pulsed neutron source in the world. As such it will provide research opportunities unavailable elsewhere.

Although the United States pioneered the development and use of early neutron sources, European and Japanese scientists developed newer sources that have been the best in the world for the past 15 to 20 years. Since the1968 start-up of the Institut Laue Langevin in France, Europe has been the leader in neutron-scattering research. In scientific terms, however, even the newest existing facilities are quite old. With the construction of the SNS, that situation is about to change.

The SNS design calls for an accelerator system consisting of an ion source, a 1-GeV linear accelerator, and a proton accumulator ring that will deliver a 2-MW beam to a liquid mercury target. A prototype negative hydrogen (H_) ion source has already been tested.

Three different types of accelerators will be employed in the linac. The superconducting linac described above is preceded by a drift-tube linac and a coupled-cavity linac, which are made of copper and operate at room temperature. To produce the short, sharp pulse of neutrons needed for optimal neutron-scattering research, the H_ beam from the linac must be compressed more than 1000 times.

Because of the enormous power the 1-GeV proton beam will deposit in the target, a liquid mercury target will be used instead of a solid material such as tantalum or tungsten. The SNS will be the first scientific facility to use mercury as a target for a proton beam. Cryogenic moderators will be located above and below the target, and one ambient moderator will be located below the target.

An opportunity for future development will be a second target station dedicated to the use of long-wavelength neutrons provided with a longer pulse separation (i.e., a lower pulse rate) than in the first station. The SNS is working with the National Science Foundation to explore avenues by which their grantees could participate in the SNS project by developing this future target station and its associated instrumentation.

SNS Instrumentation
When SNS is complete and operating at 2 MW, it will offer more than an order-of-magnitude higher flux than any existing facility, with potential for research in chemistry, condensed matter physics, materials science and engineering, and biology. A world-class suite of instruments is being developed that is suited to the needs of users across a broad range of disciplines.

The SNS will be a user facility, and the scientific user community has been heavily involved in establishing performance requirements for the SNS and in selecting the initial instruments to be included in the facility. The current instrumentation budget allows for 10 or 11 best-in-class neutron-scattering instruments out of a total of 24, which can ultimately be accommodated on the high-power target station. The SNS construction budget for instruments is supplemented by a significant R&D program.

The main criteria for instrument selection are the scientific program articulated by the instrument team and the need for the unique capabilities of the SNS. The goal is seamless user access and instrument optimization across the facility. Plans are in place to obtain input at the Users Meeting and Instrumentation Workshop to be held May 22-24 in Washington, D.C. Additional information about the conference or comments and suggestions regarding the instrument suite may be directed to the SNS Experimental Facilities Division Director, Dr.Thom Mason (masont@ornl.gov) or the SNS Instrument Systems Team Leader, Dr.Kent Crawford (rkcrawford@anl.gov).

The SNS is at a critical stage as it emerges from conceptual design and begins physical construction. Endorsement by the Solid State Sciences Committee of the National Research Council and the recent resolution of support from the Council of the American Physical Society have both stressed the national importance of the SNS.