It's estimated that from 70% to as much as 80% in the expansion of our economy is technology-driven, derived from the most productive system of scientific innovation in the world. This is also true of our national security. Science is indispensable to the development and maintenance of the nation's arsenals. The Department of Energy's Nuclear Stockpile Stewardship Program is central to the safety and reliability of American nuclear weapons and to our hope for a worldwide ban on nuclear tests. But this program will fail without a continuing intense development effort based on cutting-edge science. And a great deal of the science needed is being pursued in fundamental non-weapons-related research around the world.

Science expresses the collective intelligence of humankind and it cannot be impounded by any nation. As is true of the world's economy, so is science global. Any impediment to the exchange of ideas serves only to isolate and degrade both international and domestic inquiry. But what are we to make of the return to the U.S. from its international S&T investments over the years?

Many of you may be familiar with the 1997 Rand Corporation Study by C.S. Wagner entitled, International Cooperation in Research and Development: an Inventory of US Government Spending and a Framework for Measuring Benefits. The study reports that in FY95, U.S. Government support for international cooperation and development exceeded $3.3 billion. This constituted about 4.5% of the total annual federal research and development budget. Of this, three-quarters goes directly to support research collaborations. Why do we spend so much on international collaboration? Wagner enumerates four reasons:


I will add one other element: Self-organized collaborations yield prodigious increases in productivity for the core activity, member scientists and cooperating institutions.

Let's look at how we distributed these funds. The bar graph below summarizes the contributions by agency. Setting aside NASA, most of the funds are contributed by DoD, US AID, NSF and DoE (this would be rearranged today if we account for the DoE and NSF contributions to the CERN Large Hadron Collider project). The inset graph illustrates the disciplines being supported (excluding the international space station).

It is certainly easy to point to the importance of the geological sciences, physics, biomedicine and materials engineering to our national interest. But while the study develops a framework for assessing the impact on national priorities in science and technology, it does not answer the question of whether the return on investment is warranted. The largest investments - excluding the space program - are in support of national security.

If we ask ourselves what's at stake in this debate over the value of our investments in international cooperation, we can make a relatively simple back-of-the-envelope calculation. In a recent study of organizational complexity, Barbara Drossel of the University of Manchester invoked a model for productivity dependent upon the numbers of partners in a group and impediments to communication. Drossel assumes that group productivity per number of cooperating individuals increases as the size of the group but is depreciated by the costs of maintaining connectivity within the group. This yields a very simple model where the productivity gain of a group per member is proportional to the numbers of members and is reduced by the square of the numbers of members. So long as the cost of maintaining the group is very much smaller than the costs of communication, group productivity will climb as members are added, eventually reaching a peak and plunging negative as more and more of the group's resources go into maintenance.

As the cost of maintaining the group decreases from 5% to 9% of the productivity gain parameter, the maximum group productivity declines by a factor of 3 and the optimum group size declines from 14 to about half. We can generalize this model to examine the combination of groups to form larger collaborations of "supergroups." Using this model to examine the behavior of interacting groups we find that collaborations provide enormous increases in productivity. Over a broad range of small group's productivity and connectivity parameters, the putative gains in productivity of the full collaboration can be impressively large. In fact, calculations for larger numbers of collaborating groups imply that rather large gains can be achieved for modest investments to bring these groups together. This model may be further generalized to higher-order collaborations of groups of supergroups. Thus, research groups, institutional collaborations and regional intergovernmental organizations may be examined.

We have a long way to go before we can confidently assess the likely gains and costs of maintaining an international collaboration for all but the largest projects. But such assessments are possible and the early results support the economic foundations for vigorous international scientific collaborations.

Irving Lerch is the APS director of international scientific affairs. 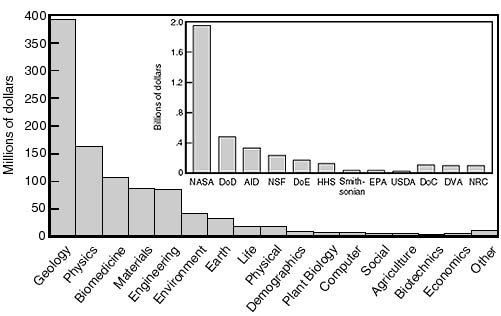