In October, the 1998 Nobel Prize in Physics was awarded to Horst Stormer of Columbia University, and Dan Tsui of Princeton, University, for their discovery of the fractional quantum Hall effect at Bell Labs in 1982. They share the prize with Robert Laughlin of Stanford University, who explained the puzzling phenomenon in terms of quasiparticles a year later. The award will be officially presented at the Royal Swedish Academy of Sciences in Stockholm, Sweden later this month. Stormer and Tsui, both APS Fellows, shared the 1984 Oliver Buckley Prize, which Laughlin won two years later. The trio also shared the 1998 Medal of the Franklin Institute for their work associated with the fractional quantum Hall effect.

Born in 1950 in Visalia, California, Laughlin received his PhD in physics in 1979 at the Massachusetts Institute of Technology. He has been a professor of physics at Stanford since 1989. Stormer was born in 1949 in Frankfurt/Main, Germany, and earned his PhD in physics 1977 at Stuttgart University. He was a supervisor of the Physical Research Laboratory at Bell Laboratories from 1992-98, and is now a professor of physics at Columbia University. Born in 1939 in Henan, China, Tsui received his PhD in physics in 1967 at the University of Chicago, and has been a professor at Princeton University since 1982. Both Stormer and Tsui were visiting scientists at MIT's Francis Bitter National Magnet Laboratory when the experiment took place.

Two other APS Fellows shared the 1998 Nobel Prize in Chemistry. Walter Kohn, a physicist at the University of California, Santa Barbara, and John Pople, a chemist at Northwestern University were cited for their contributions to the establishment of computational quantum chemistry. Kohn, who headed the Institute of Theoretical Physics in Santa Barbara from 1979-1984, developed the density-function theory, which describes atomic and molecular bonding not by accounting for the motions of all the participating electrons, but rather by specifying the effective density of electrons, making the whole problem much more computationally tractable. Pople developed computational methods combining new quantum chemistry insights with the increasing power of computers.

Addition information on the research for which the 1998 Nobel Prizes in Physics and Chemistry were awarded can be obtained from two October 1998 Physical Review Focus articles [focus.aps.org/] and the Nobel Prize website [http://nobelprize.org/nobel_prizes/lists/1988.html]. 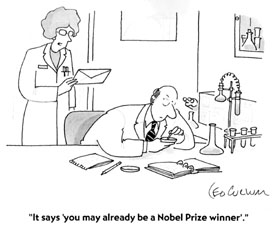