A Century of Physics 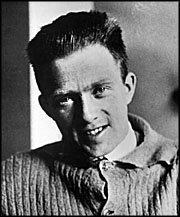 The Roaring Twenties were a boisterous era of prosperity, fast cars, jazz, popular radio, and illegal drinking. Before they ended in 1929 with the crash of the stock market that triggered the Great Depression, the twenties produced such human and technological accomplishments as the invention of television and the jet engine, and the first transatlantic solo flight by Charles Lindbergh in 1927. Out of range of public clamor, this exhilarating atmosphere also produced what might be called the greatest achievement in the history of physics: the development of quantum mechanics. Frustrated by the inconsistencies of the patchwork quantum theory pioneered by Einstein and Bohr, the 23 year old German physicist Werner Heisenberg (right) set out to start from scratch. In the summer of 1925 he decided that atoms should be described without assuming anything about immeasurable quantities such as the positions and speeds of electrons inside atoms. Instead, he arranged the measurable quantities, such as the discrete frequencies of light emitted by the atom, in arrays of numbers not unlike spreadsheets. By manipulating these spreadsheets, which mathematicians call matrices, Heisenberg was able to recover the successes of the older quantum theory, without encountering its contradictions.

Heisenberg's matrices give the right answers, but convey no visual image of the interior of the atom. In the winter of 1925-26 the Austrian physicist Erwin Schr"dinger succeeded in finding a more intuitively appealing description. In this approach, de Broglie's waves are solutions of an equation which came to be called the Schr"dinger equation. Discrete colors of light emitted by glowing matter are due to the fact that electron waves confined in an atom have specific frequencies, just as sound waves inside a flute can only resonate with discrete frequencies.

The culmination of the story of the birth of the new theory came with Schr"dinger's amazing proof, in March 1926, that his and Heisenberg's formulations, which appeared so different, are actually mathematically equivalent. Henceforth quantum mechanics, in either guise, replaced Newtonian mechanics as the correct description of atomic particles. It incorporates wave/particle duality and substitutes probability for certainty in dealing with the building blocks of matter. It broke with classical physics even more radically than Special and General Relativity - but for three quarters of a century it has passed all experimental tests.

Editor's Note: A CENTURY OF PHYSICS, a dramatic illustrated timeline wallchart of over a hundred entries on eleven large posters is intended for high schools and colleges. Each poster covers about a decade and is introduced by a thumbnail essay to provide a glimpse of the historical and scientific context of the time.

In July, APS News will feature the fifth introductory essay: 1935-1945: Physics in WWII.