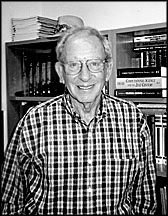 Former APS President Eugen Merzbacher, a professor of physics at the University of North Carolina, Chapel Hill, has been appointed as a senior consultant to the APS Centennial Office. Merzbacher will advise the Centennial staff on the the general APS exhibit; the individual unit exhibits and symposia; the various planned APS Reunions; the Centennial public relations initiative; and other issues as needed.

Born in Berlin, Merzbacher received his early education in Germany, but moved to Turkey in 1935 as a refugee from Nazi Germany. In Turkey, he completed his secondary and college-level education, and subsequently taught high school until 1947. He then became a graduate student in physics at Harvard University, receiving his PhD in 1950.

After one year as postdoctoral fellow at the Institute for Advanced Study in Princeton, and another year as a visiting faculty member at Duke University, Merzbacher joined the University of North Carolina at Chapel Hill in 1952. There he moved through the academic ranks and eventually became a Kenan Professor of Physics, serving for several years as chair of the Department of Physics and Astronomy. In 1988 he was elected as APS Vice-President, serving as the Society's President in 1990, and has also served on and chaired numerous APS committees. He is a member of the Editorial Board of Physical Review A and of Atomic Data and Nuclear Data Tables.

Merzbacher retired from teaching in 1991, and is now Kenan Professor of Physics, Emeritus. In 1993 UNC awarded him an Honorary Doctor of Science degree. His primary research interests have been in the theory of ion-atom collisions, beta decay, nuclear reactions, and the fundamentals of quantum mechanics. In 1961 he published the textbook Quantum Mechanics, which is now in its third edition. While at Chapel Hill, he was also instrumental in the creation of the Triangle Universities Nuclear Laboratory (TUNL). He served for more than three decades as principal investigator of the UNC-CH component of this three-university program, supported by the U.S. Department of Energy.