APS Past President C. Kumar N. Patel, vice chancellor for research at the University of California, Los Angeles, is one of eight scientists to receive the National Medal of Science, the nation's highest science honor. President Clinton announced this year's recipients and the five winners of the National Medal of Technology in June. The medalists will be honored at a White House ceremony later this summer. Patel was honored for his invention of the carbon dioxide laser, a major scientific and technological breakthrough which continues to be an important tool in manufacturing, medical treatment, scientific investigations and materials processing. His carbon dioxide laser also led to the creation of new generations of lasers and laser systems.

"The 13 recipients of these prestigious medals are American champions of research and innovation," the President said. "Our nation is grateful to these visionaries for advancing our base of knowledge. American industry especially is indebted to them for contributing vital new discoveries and applications that businesses have developed into cutting edge ideas, products and processes. Fueled by science and technology, American enterprise remains the world's leader in today's global marketplace." 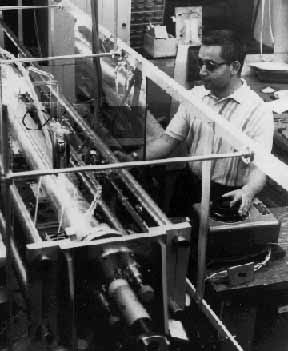 The National Medal of Science, established by Congress and administered by the National Science Foundation, honors individuals for contributions to the present state of knowledge in one of the following fields: physical, biological, mathematical, engineering or social and behavioral sciences. The medal has now been awarded to 344 distinguished scientists and engineers.

Since its establishment by Congress, the National Medal of Technology, administered by the U.S. Department of Commerce, has honored 94 individuals and seven companies for technological innovation and advancement of U.S. global competitiveness. The Medal of Technology also recognizes groundbreaking contributions that commercialize a technology, create jobs, improve productivity or stimulate the nation's growth and development in other ways.

The other seven 1996 recipients of the National Medal of Science are Wallace S. Broecker (Columbia University), for his pioneering contributions in understanding chemical changes in the ocean and atmosphere; Norman Davidson (California Institute of Technology) for breakthroughs in chemistry and biology which have led to the earliest understanding of the overall structure of genomes; James L. Flanagan (Rutgers University) for his foremost leadership and innovation in bringing engineering techniques and speech science together to solve basic problems in speech communication; Richard M. Karp (University of Washington) for his groundbreaking work in theoretical computer science; Ruth Patrick (Academy of Natural Sciences, Philadelphia) for her leadership in understanding biodiversity as an indicator of environmental quality; Paul A. Samuelson (Massachusetts Institute of Technology) for his fundamental contributions to economic science, education and policy for nearly 60 years; and Stephen Smale (University of California-Berkeley) for four decades of pioneering work on basic research questions which have led to major advances in pure and applied mathematics.

The five recipients of the National Medal of Technology are Charles H. Kaman, president, chairman and CEO, of Kaman Corp., for his pioneering work in helicopter technology; Stephanie Louise Kwolek, consultant and former research associate at Du Pont Co., for her contributions in the discovery and development of high-performance aramid fibers; James C. Morgan, chairman and CEO, Applied Materials, Inc., for his vision and leadership in the development of the U.S. semiconductor manufacturing equipment industry; Peter H. Rose, president, Krytek Corporation, for his leadership in the development and commercialization of ion implantation products, which are necessary for the production of modern semiconductors; and Johnson & Johnson, the world's largest and most comprehensive health care company.