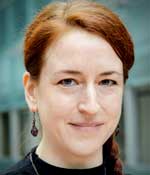 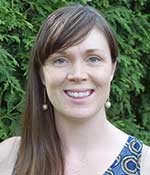 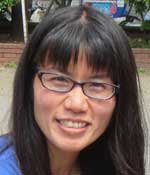 Hilary A. Carteret
University of Waterloo
Hilary Carteret, Ph.D. is a visiting researcher in the department of Physics and Astronomy at the University of Waterloo, (Ont., Canada). She was an affiliate postdoctoral fellow at The Perimeter Institute until a health crisis interrupted her career.The Blewett Fellowship will allow Dr. Carteret to continue her work adapting entanglement measures and other insights from Quantum Information Theory to make them more accessible to colleagues working in other areas of physics. In particular, the fellowship will support further collaboration with Roger G. Melko, Ph.D.,developing methods for exploring long-range entanglement phenomena in large scale computer simulations of condensed matter systems, including ones at finite temperatures, and those that may exhibit quantum criticality.

Sarah Cuddy-Walsh
Carleton University
Sarah Cuddy-Walsh is a Ph.D. candidate in physics with a subspecialty in medical imaging at Carleton University (Ottawa, Ont.). After temporarily suspending her research in order to care for an ailing parent and for her newborn son, Ms. Cuddy-Walsh has returned to the University of Ottawa Heart Institute where she investigates the variability of sensitivity and resolution in multi-pinhole cardiac single-photon emission computed tomography imaging (SPECT) and its impact on patient diagnosis. The Blewett Fellowship will enable Ms. Cuddy-Walsh to expand the work she’d started before her family emergency.

Yoko Suzuki
Los Alamos National Laboratory
Yoko Suzuki, Ph.D. received her Ph.D. in physics from the City University of New York in 2007, having completed her B.S. in physics from Ochanomizu University, (Bunkyō, Japan) in 1995. Dr. Suzuki specializes in low temperature and high magnetic field experiments; she discovered magnetic deflagration in single molecule magnets as part other graduate studies. As a Seaborg Fellow, Dr. Suzuki worked on the phase transitions in plutonium using resonant ultrasound spectroscopy (RUS) at the National High Magnetic Field Laboratory at Los Alamos National Laboratory in New Mexico, where she is a research scientist at The New Mexico Consortium. Dr. Suzuki’s current research focuses on the role of spin-phonon coupling during quantum tunneling of magnetization, stochastic spontaneous nucleation of magnetic avalanches, decoherent processes in a Landau-Zener two level crossing and the possibility of spin manipulation using ultrasound in single-molecule magnets. She also is interested in software and hardware developments for RUS.