Natalia Drichko, a visiting Research Assistant Professor at the Institute for Quantum Matter at Johns Hopkins University in Baltimore, Maryland, will work on the connection between antiferromagnetic order and unconventional superconductivity.  While living in Europe, Drichko was the recipient of both the Alexander von Humbold Foundation Fellowship and the Margarethe von Wrangell Habilitation Fellowship.  Her research track record includes 53 publications in peer-reviewed journals and a patent registered in the Russian Federation.

Drichko gave up her habilitation fellowship and the potential professor positions that follow a habilitation to join her husband as his career took him to Johns Hopkins University.  She had a further career break due to the birth of her first child.

Drichko earned her MSc from St. Petersburg State University in 1996 and her PhD from the Ioffe Physico-Technical Institute in St. Petersburg in 2002. 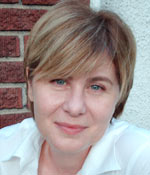 Marija Nikolic-Jaric, a Post-Doctoral Research Fellow at the University of Manitoba in Winnipeg, works on biophysical flow cytometry, with the support of the Department of Electrical and Computer Engineering. A previous recipient of the Blewett Fellowship, Nikolic-Jaric will use the award to further increase her independence as a scientific investigator and strengthen her emerging connections with other professionals in this field.

Nikolic-Jaric received her BSc from the University of Belgrade in 1990 and her PhD from Simon Fraser University in Vancouver in 2008. While working on her PhD at Simon Fraser University in Vancouver, her husband, also a physicist, was diagnosed with a rare and terminal brain cancer shortly before her thesis defense. His illness and, ultimately, tragic and untimely death, put her career temporarily on hold, to care for their toddler son.

"It is amazing,” she says, “ how complete is the delusion that dropping out of physics for family reasons is a choice that women make easily and readily. By recognizing the obstacles awaiting women who want to return to research after the break and offering to help, the Blewett Scholarship validates and legitimizes the experiences and career paths that are outside of mainstream. I am proud to be a part of something like that and hope that in the future I will be given an opportunity to work with the Committee to inspire and allow other women in physics to make the most of their lives."