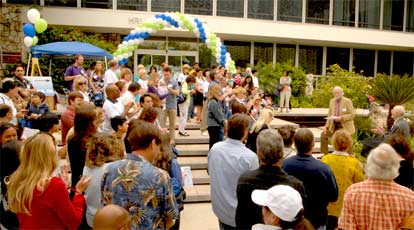 Barry Barish making the presentation at Hughes Labs. Barish is wearing a tan jacket, standing center right. Barely visible, to the right of Barish in the greenery, is the black-draped commemorative plaque.

On May 16, 2010, APS President-elect Barry Barish presented a plaque to Hughes Research Laboratories in Malibu, California, to commemorate an event that had taken place there exactly 50 years before: operation of the world’s first working laser.

Lasers are ubiquitous in 21st century society, with applications in telecommunications, DVD players, checkout scanners, cutting and welding, eye surgery, tattoo removal, dentistry, and medicine, to name just a few of the markets that make up this multi-billion-dollar industry. But it all started with one lone physicist, Theodore Maiman, who defied the doubts of skeptical colleagues to build the first working laser in 1960. That achievement earned him the moniker, “father of the electro-optics industry.”

Born in Los Angeles in 1927, Maiman spent his formative years in Denver. His father was an electrical engineer and an inventor who wanted his son to be a doctor. Instead, the young Theodore parlayed his gift for mathematics — and early job experience as a radio and appliance repairman — into degrees in engineering physics from the University of Colorado. In 1955, he completed his PhD in physics at Stanford University, under his advisor, Willis E. Lamb, who won the Nobel Prize in Physics that same year. He soon found work with Hughes Aircraft Company, and it was there that Maiman got caught up in the race to build the first working laser.

The theoretical underpinnings of the laser had been around for many years. Albert Einstein first broached the possibility of stimulated emission in a 1917 paper, although wasn’t until the 1940s and 1950s that physicists found a novel use for the concept. In 1953, Charles Townes patented a device he called a maser, for “microwave amplification by stimulated emission of radiation.” But the technique was limited to the microwave regime of the electromagnetic spectrum. Townes thought it might be possible to gain even more information by developing a device that produced light at much shorter wavelengths, extending the maser concept to the optical range. The best way to do this, he thought, would be to use molecules to generate the desired frequencies through stimulated emission.

With his colleague (later his brother-in-law), Arthur Schawlow, Townes wrote a paper detailing the concept, “Infrared and Optical Masers,” and published it in the December 1958 issue of the Physical Review1, although they had yet to build a working prototype. They received a patent for their design two years later. That paper caused a flurry of research by other scientists vying to make this theoretical device a reality. Other major companies doing research in this area — many boasting hefty federal grants — included Bell Labs, RCA Labs, Lincoln Labs, IBM, Westinghouse and Siemens.

Unveiling the commemorative plaque which reads:

"At this laboratory Theodore H. Maiman and co-workers constructed the world's first working laser, on May 16, 1960. Made of synthetic ruby, it was the harbinger of a technological revolution that has forever changed the world."

Against those steep odds, Maiman won the race in the same year Townes and Schawlow received their first patent for the “optical maser.” He brought both his physics and engineering training to bear on the problem. Ironically, his supervisors at Hughes initially weren’t interested in having him follow that line of research – he had been hired to work on government aerospace contracts — but Maiman insisted, so he was grudgingly given a meager budget of $50,000 over nine months, and he set to work.

On May 16, 1960, Maiman succeeded in producing a short burst of coherent light from his humble device – not a continuous concentrated beam of light, and far less powerful than many lasers today, but nonetheless, it was a working laser. More importantly, it was very easy to build. “It looked like a high school [science] project,” his widow, Kathleen, said recently. “It is so simple. But [so much] physics and thought went into it.”

He published his discovery in Nature. Townes later called Maiman’s paper “the most important per word of any of the wonderful papers” that the journal had published in its 100+ years. But at first, the relevance of the accomplishment wasn’t clear. “A laser is a solution seeking a problem,” Maiman’s colleague Irnee d’Haenens once observed, and while Maiman believed in the device’s potential, Hughes was less interested in developing applications.

A frustrated Maiman left Hughes and founded his own company in 1961, Korad, devoted entirely to the development and manufacture of lasers, and in 1968 he left that position to found another company, Maiman Associates. Ultimately he held patents not just for his first laser, but also related to masers, laser displays, optical scanning and laser modulation.

The question of patent rights has proven to be a fairly litigious one, most notably the case Gordon Gould, a graduate student under Townes at Columbia University in the late 1950s. He later sued to earn patent rights based on his research notebook, which contained an entry dated and notarized in November 1957, describing his own design for a laser. Gould fought for decades, and in 1973 the U.S. Court of Customs and Patent Appeals ruled that the original patent awarded to Schawlow and Townes was too general, and did not supply enough information to create certain key components of a working laser. Gould was finally granted patent rights.

Maiman died from systemic mastocytosis on May 5, 2007. As for that first working laser, it is stored in a safe deposit box in a bank in downtown Vancouver, BC.  The white box (wrapped in bubble wrap and Styrofoam) has a label scrawled on top in bright red ink: “Maiman’s laser.”