The Standard Model describing nature’s matter and force particles is known to be incomplete, and the conventional techniques for discovering new particles (colliders, large detectors, etc.) are becoming prohibitively expensive. Given the challenge posed by open questions such as the nature of dark matter and dark energy, it is important to find alternative ways to test well motivated theories that aim to solve the important problems in the area of fundamental particles and interactions.

Precision instruments create a timely opportunity to search for new physics beyond the Standard Model by measuring small signals in cost-effective experiments that are often well suited to university-scale laboratories. Novel instruments and methods that use quantum mechanics to achieve new measurement capabilities—so called quantum technologies—have exploded over the past two decades and lie at the core of this emerging opportunity. The range of instrumentation is broad, spanning current and emerging techniques from, for example, atomic and optical physics to quantum information science; with specific instruments that include atomic clocks and interferometers, high-Q quantum-limited resonators, and ultra-sensitive electromagnetic field detectors, to name a few.

While new measurement capabilities represent an important opportunity for advancing this area of physics, designing a new suite of experiments empowered by precision instruments will require collaboration between experts in fundamental physics and experts in relevant technologies. The Gordon and Betty Moore Foundation, with the aid of the American Physical Society (APS), sought to motivate an exchange of ideas aimed at identifying signatures of new physics in novel, cost-effective experiments. Through grants that supported lectures, one-on-one visits, and workshop gatherings, the foundation stimulated ideas on innovative ways to detect dark matter, learn about dark energy, or address other pressing problems in the area of fundamental particles and interactions.

Grants were open to both theorists and experimentalists, and ideas for experiments focused on platforms well suited to a single Principal Investigator (PI) or small team of PIs rather than to a large facility (e.g. collider) or instrument (e.g. telescope). While this focus implies that the cost of experimentation is modest relative to large-facility projects, it does not imply anything about the physical scale of experimentation; a worldwide network of low-cost detectors would, for instance, fit within the scope of these awards. The grants were also open to researchers who—with a goal of advancing fundamental physics—want to improve their baseline understanding of, or advance the frontiers of, either novel precision technologies or of issues in the physics of fundamental particles and interactions.

The intent of these grants was not to support long-term construction and operation of detectors or long-term theory studies. However, proposed projects could have included: development of small-scale beyond-standard model (BSM) physics detectors, conceptual design and proof-of-principle studies for BSM detectors, development of novel dark-matter detection using new technologies, development of tests of symmetry-violating observables such as time-reversal invariance, development of laboratory tests of general relativity and new long-range forces, phenomenology leading to new experimental observables, and efforts to find new experimental signals of BSM physics. 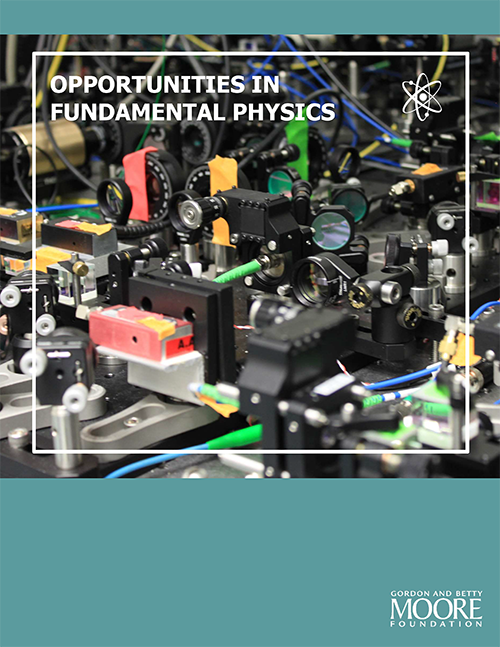