The Impact of Industrial Physics on the U.S. Economy

1-page Summary of the Report

Industrial physics is a major contributor to the economic well-being of the United States and makes its contribution in four major ways:

The American Physical Society, with support from the American Institute of Physics, recently sponsored an in-depth analysis of the impact of industrial physics on the U.S. economy. The major findings are given in the box on the right and detailed in this report.

In one way, the size of the impact is not surprising given the increasingly technological nature of our economy. For example, since 1946, industries such as computer hardware and software, semiconductor and sensor manufacturing, and consumer electronics, have grown dramatically and are major economic drivers today. These industries are the direct result of the exciting physics discoveries of the 20th century being transformed into products and services by industrial physicists and other scientists and engineers well-versed in physics.

This impact is anticipated to grow even larger in the future, and it is incumbent upon industry, academia, government, and physics professional societies to recognize the importance of nurturing industrial physics by training the next generation of industrial physicists, increasing the quality of physics training to non-physicists, and fully supporting industrial physicists as they pursue their careers. In addition, 21st-century industry will need new physics and a better understanding of our physical world, a goal that requires the United States to maintain its world leadership in physics R&D.

This project was managed by the APS Industrial Physics Advisory Board. This group of physicists work in the private sector and advise APS on issues related to industrial physics. The objective is to improve the engagement of APS with the non-academic physics community. More information about the IndBoard is available at the Advisory Board page.

This project was funded by APS and several generous donors. The AIP Venture Partnership Fund provided major support with a substantial grant. We gratefully acknowledge all of the organizations that supported this project:

There have been three similar reports prepared about the economic impact of physics in the UK, Italy, and the EU. You can find copies at these links:

UK: The Importance of Physics to the UK Economy

Italy: The Impact of Physics on the Italian Economy

EU: The Importance of Physics to the Economies of Europe 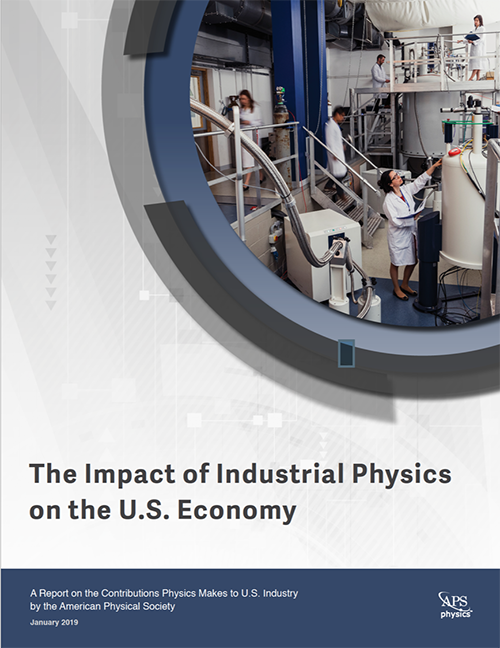 Direct employment related to industrial physics was about 11,500,000 people in 2016, which accounts for 6% of total U.S. employment.

U.S. exports by physics-based sectors are about $1.1 trillion (2016), which is approximately 20% of the value added (GDP) by those sectors.

In 2015, U.S. physics-based companies made internal R&D investments of over $150 billion.

Including indirect and induced contributions, industrial physics contributed approximately 30% of the U.S. GDP in 2016, or about $5.5 trillion.