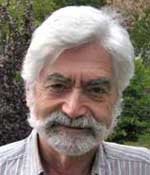 
"For his independent proposal that hadrons are composed of fractionally charged fundamental constituents, called quarks or aces, and for developing its revolutionary implications for hadron masses and properties"


George Zweig was a graduate student in physics at Caltech under Richard Feynman. Zweig pored over all the experimental data on known particles and proposed the existence of quarks independently of Gell-Mann and Ne'eman. Zweig continued to work in particle physics, both experimental and theoretical, as a professor at Caltech until the early 1970s. Zweig subsequently took up neurobiology, in particular studying sound. He investigated what happens to sound when it enters the ear, and how the brain maps sound onto the spatial dimensions of the cerebral cortex. This led to the discovery the continuous wavelet transform by Zweig in 1975. Zweig also developed the device known as the SigniScope, which simulates the response of the inner ear to speech. Zweig is president of Signition (which makes the SigniScope), and also continues his research in cochlear mechanics as a Fellow at Los Alamos National Laboratory.