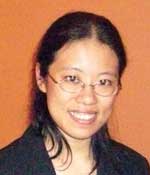 
Bilin Zhuang received her B.A. degree with majors in Physics and Chemistry from Wellesley College in June 2009. She conducted her undergraduate thesis research in the thermodynamic properties of frustrated Ising systems under Professor Courtney Lannert in Wellesley College. Her thesis research, supported by the Jerome A. Schiff Fellowship, focused on modeling the thermodynamic properties of extended two-dimensional frustrated Ising systems with much smaller systems of less than 30 atoms. Upon graduation, she received the Phyllis J. Fleming Prize for distinction in physics as well as the Jean V. Crawford Prize in chemistry. Currently, she is employed by the Agency for Science, Technology and Research (Singapore) and works on theories related to MRAM devices. She intends to pursue PhD studies in theoretical physics or chemistry starting in Fall 2010.