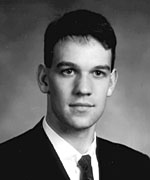 
"For his achievements as an undergraduage student at Haverford College, particularly his research on 'Mixing of a Passive Scalar in Two-Dimensional Turbulence'."


Mr. Williams was honored for his thesis entitled, "Mixing of a Passive Scalar in a Two-Dimensional Turbulence," which has been submitted to Physics of Fluids for publication. He is currently pursuing graduate studies at MIT in the department of electrical engineering, where he has been awarded a research assistantship.

During his senior year at Haverford College, Mr. Williams embarked on a novel experimental study of mixing in two-dimensional turbulence, testing an old but never satisfactorily confirmed prediction about the spatial power spectrum at high wave numbers of a weakly diffusing impurity that is passively advected by a flow. He obtained strong evidence for an unexpected result, namely, that the power spectrum of the concentration field falls off much more strongly with increasing wave number than had been anticipated. His results may have interesting applications to geophysical transport.