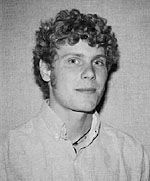 
"For his achievements as an undergraduate student at Middlebury College, particularly his research on 'Identification and Study of Supernova Remnants in the Galaxy M31'."


For his senior thesis at Middlebury College in Vermont, Williams conducted an extensive search of the nearby spiral galaxy M31, known as Andromeda, for supernova remnants, using large format charge-coupled device (CCD) images from the Burrell Schmidt telescope at Kitt Peak Observatory in Tucson, Arizona. However, the angular resolution of the Schmidt telescope system is too coarse to observe real structure in the remnants, making it difficult to measure their sizes accurately. Thus, Williams perfected techniques for making large digital mosaic images, resulting in exceptionally smooth images with excellent signal-to-noise ratios, which enabled him to search with much greater sensitivity than his predecessors. He also conducted an analysis of the statistical distribution of the remnant sizes, as well as the implications for remnant evolution and the supernova rate in the M31 galaxy.

The project was hugely successful. Where research by several international groups over the past 20 years has led to the identification of 12 confirmed remnants and 12 other candidate objects, Williams identified 100 candidates, the largest optical sample of supernova remnants known in any galaxy. The vastly expanded pool will provide a rich resource for studying the structure and chemical composition in interstellar medium in the Andromeda galaxy, which is thought to be very similar to our own Milky Way galaxy. Williams was awarded his department's only physics prize upon graduation, and plans to apply to graduate schools later this year.