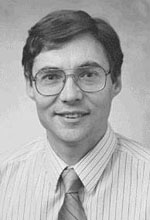 
"For pioneering work on the production and study of Bose-Einstein condensation in a dilute atomic vapor, which has become a major testing ground for macroscopic quantum phenomena, and quantum statistical mechanics."


Dr. Wieman received his B.S. from MIT in 1973 and his Ph.D. from Stanford University in 1977. Since 1984 he has been at the University of Colorado, where he is currently a Distinguished Professor of Physics and a Fellow of JILA.

Dr Wieman has carried out research in laster spectroscopy, with an emphasis on laser cooling and trapping of atoms and the measurement of parity nonconservation (PNC). Recently his group made the most precise measurement of atomic PNC; in the process, they made the first measurement of an anapole moment. He also is studying the properties of Bose-Einstein condensates in a varietyof systems. He is involved in developing new ways to teach physics to non-scientists.

Dr. Wieman has received the E. O. Lawrence Prize in Physics (DOE), the Davisson-Germer Prize for Atomic Physics (APS), the Richtmyer Memorial Lecture Award (AAPT), the F. London Prize for Low Temperature Physics (IUPAP), and the King Faisal Prize. He is a Fellow of the American Physical Society, Chair of the DAMOP, and a member of the National Academy of Sciences, the American Academy of Arts and Sciences, and the American Association of Physics Teachers.