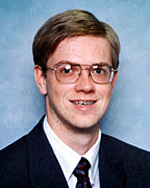 
I will receive my undergraduate degree from Illinois State University in May of 2002. I have worked in the Intense Laser Physics Theory Unit at Illinois State from August of 1998 through the present. In addition to the Apker Award, I have also received a Barry Goldwater scholarship and I have been twice selected to present in the undergraduate research session of the DAMOP meetings in 1999 and 2001. My current research focuses on numerical simulations of cycloatoms. Cycloatoms can be created with a hydrogen atom in a linearly polarized laser and a static magnetic field orientated parallel to the magnetic field component of the laser beam. When the magnetic field is chosen such that the cyclotron frequency of the electron is close to the laser frequency, a resonance condition results that quickly accelerates the electron to a velocity close to the speed of light. When this occurs, the probability density function for the electron becomes "smeared out" into a ring-shaped distribution which rotates around the nucleus with the laser period.