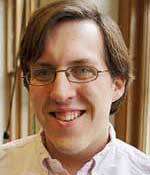 
Michael Veit's senior thesis research, which was conducted under Dr. Martin Greven, explored the phase diagram of the cuprate superconductors through transport measurements. He grew high quality single crystals of the cuprate superconductor HgBa2CuO4+δ and measured the resistivity, magnetoresistance, Hall effect, and Seebeck coefficient at various doping levels. The outcome of these measurements is highly surprising. Even though the transport properties of the cuprates were previously studied intensively, Michael's work has shown that some aspects of these complex materials are rather conventional. Despite the complexity of the phase diagram, conventional Fermi-liquid metallic behavior is observed over a wide doping range below optimal doping in the so called pseudogap regime.