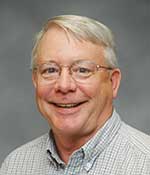 
"For insightful experiments and analyses on a wide variety of quantum solids with strong electronic correlations in general, and cuprate superconductors in particular, using optical spectroscopy."


David Tanner received his B.A. in physics from the University of Virginia in 1966, M.S. in 1967, and then his Ph.D. from Cornell University in 1972. He held a postdoctoral position for two years at the University of Pennsylvania and in 1974, joined the Physics Department at the Ohio State University. He came to the University of Florida in 1982, where he is a Distinguished Professor of Physics. His research is in three areas of experimental physics. The first is the optical properties of solids, with emphasis on high-temperature superconductors, strongly correlated metals, low-dimensional systems, electroactive polymers, and time-resolved studies of superconducting films. Second is gravitational-wave detection, with contributions to the design, construction, and operation of the Laser Interferometer Gravitational-wave Observatory (LIGO). The third is particle-astrophysics as part of the Axion Dark-Matter eXperiment (ADMX), which conducts a search for axions as a component of the dark-matter halo of our galaxy. He also is the author of more than 400 scientific papers.