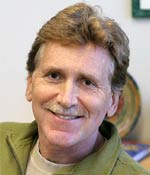 
"For the development of soft x-ray based spectroscopy and microscopy leading to fundamental contributions to the understanding of chemical bonding, magnetism and dynamics at surfaces and interfaces."


Joachim Stöhr received his undergraduate degree at Bonn University, Germany, in 1968 and his Ph.D. at the Technical University in Munich in 1974. After a postdoctoral period at Lawrence Berkeley National Laboratory, he became a staff scientist at the Stanford Synchrotron Radiation Laboratory in 1977. During his SSRL years he developed soft x-ray surface science techniques such as SEXAFS and NEXAFS. In 1981 he joined Exxon as Senior Staff Scientist and continued his work in surface science. In 1985 he moved to the IBM Almaden Research Center, where he was a Research Staff Member for 15 years and a science manager. At IBM he developed soft x-ray spectroscopy and microscopy methods for the study of organic and magnetic thin films. In 2000 he joined Stanford University as Professor of Photon Science and SLAC as Deputy Director of SSRL. He became SSRL Director in 2005 and Director of the Linac Coherent Light Source in 2009. While at Stanford/SLAC, his research has concentrated on the study of magnetic thin films and nanostructures, in particular, by means of time-resolved x-ray imaging methods that combine nanoscale spatial with femtosecond temporal resolution. Dr. Stöhr has been a Fellow of the APS since 1988.