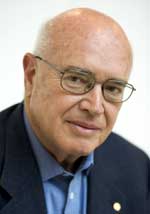 
"For groundbreaking contributions to chaos and nonlinear dynamics through precise table-top experiments in fluid systems and for outstanding mentoring of undergraduate students at all levels."


Tom Solomon is a professor in the Department of Physics & Astronomy at Bucknell University. He completed an ScB degree in physics from Brown University in 1984 and a PhD from the University of Pennsylvania in 1990, followed by a post-doctoral fellowship at the University of Texas at Austin from 1990 – 1993. Tom has collaborated with 40 undergraduate students on his research on chaotic fluid mixing and on the effect of fluid mixing on reaction fronts and patterns. Experiments in his lab have demonstrated the importance of manifolds and lobes as controlling mechanisms for long-range transport of passive impurities in a flow. Recently, Tom and his students have explored how fluid mixing (particularly chaotic mixing) affects the dynamics of reactions in a flow. They have found that reaction patterns tend to mimic the manifolds that describe passive mixing. They also found that chaotic mixing and “Levy flights” can synchronize oscillatory reactions in extended systems. Recent experiments on reactions in flow have demonstrated the existence of burning invariant manifolds that block the motion of reaction fronts. Tom has received Bucknell’s “Class of 1956 Lectureship” award for inspirational teaching and a “Presidential Professorship” endowed chair.