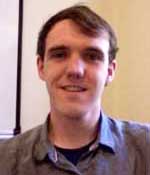 
Kevin Seltzer graduated from Loyola University Maryland in 2014 with a B.S. in Physics and Mathematics. During the summers of 2011 and 2012, Kevin worked with Dr. Andrea Erdas studying the Casimir effect for charged massless scalar (spin-zero) particles in a magnetic field. This research ignited Kevin’s interest in quantum field theory and analytic techniques in physics. As a result of this project, Kevin was named a 2013 Barry M. Goldwater scholar. In the summer of 2013, Kevin worked with Dr. Slava Rotkin at Lehigh University on the quantum electrodynamics of carbon nanotubes. Kevin also worked with Dr. Jiyuan Tao of the Loyola University Maryland Mathematics Department on finding perturbation bounds for eigenvalues in Euclid-Jordan algebras.

Currently, Kevin is a first-year PhD student at Washington University in St. Louis. He foresees himself continuing his research career in theoretical physics and ultimately teaching at the university level.