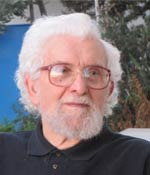 
"For his sophisticated, technically masterful historical studies of the emergence of quantum field theory and quantum electrodynamics, and broadly insightful biographical writing on several of the most influential physicists of the 20th century: Einstein, Oppenheimer, and Bethe."


Silvan(Sam) Schweber was born in Strasbourg, France in 1928.  He came to the United States in July 1942. He attended the City College of NY and graduated as a chemistry and physics major in 1947. He thereafter obtained a MS in Physics  from the University of Pennsylvania in 1949 and a PhD from  Princeton University in 1952 working with Professor Arthur Wightman. From 1952 to 1954  he was an NSF post doctoral fellow at Cornell University. In 1955 he accepted a faculty appointment at Brandeis University.

He is the author with Hans Bethe and Fred  de Hoffman of Volume I of Mesons and Fields  (1955)  and of anIntroduction to Relativistic Quantum Field Theory (1961). In the mid 1970s  his  research interests shifted to the history of science. He has written extensively on Charles Darwin and 19th century evolutionary theories and since the mid 1980s on the history of physics during the 20th century. He is the author of QED and the Men Who Made It,  Bethe and Oppenheimer and the Moral Responsibility of Scientists, and of Einstein and Oppenheimer: The Meaning of Genius. He has just finished Volume 1 of  Faith in Reason, a biography of Hans Bethe. He helped establish the Dibner Institute for the History of Science and Technology at MIT in 1988 and was its first director. In 2005 he retired from Brandeis University as the Koret Professor of the History of Ideas and Professor of Physics, emeritus.  Since 1981 he has been a Faculty Associate in the Department of the History of Science at Harvard.  He is a fellow of the APS,  the American Association for the Advancement of Science and of the American Academy of Arts and Sciences.
Selection Committee: