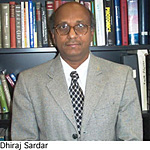 
"For his outstanding research on the interaction of laser light with matter, particularly the spectroscopic characterization of new solid-state media, for his involvement and support of undergraduates in his research, and for his dedication to minority student education."


Dr. Sardar received his B.S. and M.S. in physics from Calcutta University in 1968 and 1970, respectively; and received his Ph.D. in physics from Oklahoma State University in 1980. Following a two-year postdoctoral work in spectroscopy of technologically important materials and one-year visiting faculty position at Oklahoma State University, he taught physics for one year at Indiana-Purdue University at Fort Wayne. In 1984, he moved to the University of Texas at San Antonio as an Assistant Professor of Physics and became a Professor of Physics in 1995. He has been a visiting faculty at University of Wisconsin at Madison and University of Texas at Austin; he has also been a senior research fellow at Brooks Air Force Base at San Antonio and Naval Research Laboratory at Washington, D.C. He was invited to the NSF-sponsored workshop on the advanced undergraduate physics laboratory training at MIT. His current research interests are: (1) spectroscopic and laser properties of rare earth ions doped in crystalline solids as well as organic dyes in solid-state plastic hosts, and (2) optical characterization of biological tissues; studies on laser-tissue interactions are performed to pursue the development of noninvasive optical diagnostic technique. He has published about fifty papers in refereed journals; majority of them are with his students as co-authors. With the research grants from NSF and ACS -PRF, his research in spectroscopy of new laser materials has involved over thirty undergraduate students. Six of his research students have received seven awards for outstanding presentations at the Texas Section of the APS Conferences.

Dr. Sardar is a member of the OSA, APS, and SPIE.