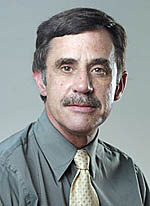 
"For his pioneering research and fundamental elucidation of the surface and interfacial behavior of polymers."


Thomas P. Russell received his PhD in 1979 in Polymer Science and Engineering from the University of Massachusetts Amherst with R. S. Stein, then spent two years in Mainz with E. W. Fischer. For the next sixteen years he was a Research Staff Member at the IBM Research Center in San Jose, Ca in the Polymer Physics where he investigated the structure and properties of thin polymer films, and the thermodynamics and kinetics of phase transitions in polymers. In 1997 he became a Professor of Polymer Science and Engineering at the University of Massachuetts Amherst where his research interests include the surface and interfacial properties of polymers, phase transitions in polymers, directed self-assembly processes, the use of polymers as scaffolds and templates for the generation of nanoscopic structures, the interfacial assembly of nanoparticles, and the influence of supercritical fluids on phase transitions and dynamics in polymer thin films. He is Director of the Materials Research Science and Engineering Center on Polymers, Associate Director of MassNanoTech and is an Associate Editor of Macromolecules. He is a fellow of the American Physical Society and the American Association for the Advancement of Science.