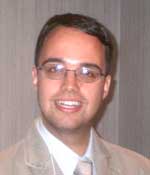 
Djordje Radicevic received a BA in physics (with highest honors) from Princeton University in May 2011.  He has worked on various research projects during his undergraduate years.  In 2009, he worked with Professor James Olsen on the search for a new gauge boson at the BaBar experiment at SLAC National Laboratory.  In 2010, he worked Professor Michael Aizenman on generalizing the reflection positivity technique in the rigorous study of phase transitions.  Finally, in the summer of 2011 he started working with Professors Herman Verlinde and Christopher Herzog on various aspects of the AdS/CFT correspondence.  This work resulted in a senior thesis that linked the renormalization group flow of a d-dimensional planar CFT and the Hamilton-Jacobi flow of a (d+1)-dimensional classical field theory without invoking the AdS/CFT dictionary from string theory.  The resulting paper has been submitted for publication in the Journal of High Energy Physics.

Radicevic has received numerous academic distinctions, including a Barry M. Goldwater Scholarship, the inductance into the Phi Beta Kappa and Sigma Xi honor societies, and the National Science Foundation Graduate Fellowship.  Starting in September 2011, he will pursue his graduate studies at Stanford University, where he plans to study quantum field theory and its applications to particle physics, condensed matter and cosmology.