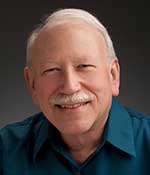 
"For a crucial role in establishing the Congressional Science and Technology Policy Fellowships."


Joel Primack received his A.B. in physics from Princeton University in 1966 and his Ph.D. in physics from Stanford University in 1970. He is a distinguished professor of physics emeritus at UCSC. He co-authored the book Advice and Dissent: Scientists in the Political Arena in 1974 and  helped create the NSF Science for Citizens program. He helped initiate the APS program of studies on public policy issues in 1974 and co-authored the proposal for the APS Nuclear Reactor Study. In 1988 he led the Federation of American Scientists program on space nuclear reactor arms control and helped stop the launching of Soviet reactor-powered satellites. In 2004 as a member of the APS Panel on Public Affairs he organized and chaired the committee that wrote the APS report on President Bush's Vision for Space Exploration. He helped organize the APS Forum on Physics and Society and has chaired the Forum’s executive committee. Primack started the AAAS Science and Human Rights program and has chaired the AAAS Committee on Science, Ethics, and Religion. He was elected fellow of APS in 1988, fellow of AAAS in 1995; he shared the Forum on Physics and Society Award in 1977 and received the Humboldt Research Award in 1999.