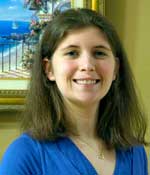 While at Mount Holyoke, Greenberg won numerous awards for her academic achievements including the Barry M. Goldwater Scholarship, the Bennett Prize and Rusk Prize for excellence in undergraduate physics, and the Diane Miller Prize for travel to two different conferences to present her research.  In addition, she was inducted into the Phi Beta Kappa, Sigma Xi, and Sigma Pi Sigma honor societies.

Greenberg is currently pursuing a MPhil in physics at the University of Cambridge on a Gates Cambridge Scholarship where she is working in Professor Sir Richard Friends laboratory to create more efficient organic light emitting diodes.  Greenberg was also awarded a Churchill Scholarship and was a finalist for the Fulbright Fellowship both of which she declined in order to accept the Gates Scholarship.  Following her year of study at the University of Cambridge, Greenberg will be attending Harvard University to pursue a Ph.D. in Applied Physics.