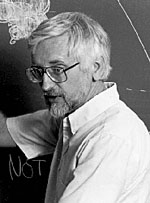 
"For his research contributions in condensed matter physics, including defect production and atomic mixing in ion-irradiated metals, and diffusion controlled nucleation, and for his role in engaging undergraduate students in the research process through projects leading to publications and conference presentations."

Dr. Peak's research has resulted in numerous publications (many with undergraduate co-authors) and invited presentations. He is co-author (with Michael Frame) of the book, Chaos Under Control). He was a founding member (1984) of the present Council on Undergraduate Research and, since 1987, has been a Governor of the National Conferences on Undergraduate Research. Peak has served as a department chair, member of the Boards of Trustees of Union College and Dudley Observatory, and on the Sigma Xi National Committee on Science, Mathematics, and Engineering Education.