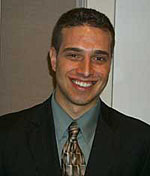 
"Experimental Studies of the Effects of Chaotic Mixing on an Advection-Reaction-Diffusion System."


Matt attended Bucknell University where he graduated in 2005 with honors in physics. During commencement ceremonies, Matt was awarded the Phi Beta Kappa Award for conspicuous academic achievement in any discipline, the Harold W. Miller Prize for excellence in the honors program, and the W. Norwood Lowry Prize for excellence in physics. Along with his advisor, Tom Solomon, Matt investigated the effects of chaotic mixing on reacting systems. Specifically, his work included the first experimental studies of the effects of mixing on front propagation, which can be applied to understanding the spread of disease through populations, flame propagation, and systems undergoing phase transitions. In addition to these studies, Matt performed the first experiments of synchronization via fluid mixing, which may help explain synchronization of spawning cycles for phytoplankton in the ocean as well as the outbreak of major epidemics. Matt also spent two summers at the National Institute of Standards and Technology characterizing and developing bioencapsulated enzymatic proteins. He is currently pursuing a Ph. D. at the University of Maryland at College Park, where he was awarded an institute fellowship. Matt plans to continue his research in the area of nonlinear dynamics.