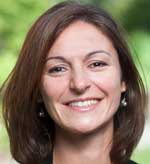 
"For contributions to neutron star astrophysics, including the theoretical interpretation of X-ray emission from magnetars and determination of accurate masses and radii that yield constraints on the equation of state; and for her outstanding contributions to the public understanding of science."


Feryal Ozel received her bachelor degree in physics and applied mathematics from Columbia University in 1996 and her PhD from Harvard University in 2002. Prior to joining the faculty at the University of Arizona as an assistant professor in 2005, she was a member at the Institute for Advanced Study at Princeton, where she also held a NASA Hubble Postdoctoral Fellowship. She became an associate professor in 2010 and holds appointments in the Departments of Astronomy and Physics.

Ozel is a theoretical astrophysicist whose primary research interests include the physics of neutron stars and black holes, as well as the formation of supermassive black holes and galaxies in the early Universe.

Ozel is a member of the American Astronomical Society and the American Physical Society. Her awards and honors include the Bart J. Bok Prize, the Lucas Award in Astronomy, Turkish Scientific and Research Council Scholar Award, the Harvard Radcliffe Institute Fellowship, and a Berkeley Miller Institute Professorship. She frequently appears in TV documentaries on PBS, the History Channel, CNN International, and Turkish Radio and Television as well as in many scientific articles in the popular press.