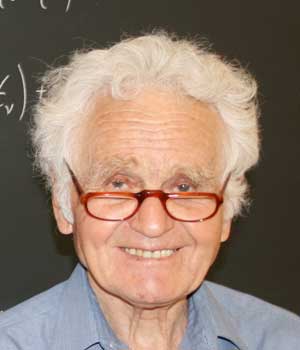 
"For pioneering innovation in accelerator theory and practice, including the independent development of the synchrotron radiation partition sum rule; seminal contributions to the muon g-2 experiment; deep understanding of beam and spin dynamics; consistently unique and fruitful ideas, ranging from the practical to the visionary; and embodying the spirit of scientific freedom."


Born in Moscow, Orlov studied physics with Berestetsky, Kapitsa and Landau in the Physico-Technical Institute. After graduating (1952), he joined the theoretical department of the Institute for Theoretical and Experimental Physics and helped design ITEP's proton synchrotron. Fired for a pro-democracy speech (1956), he worked on accelerator physics in Yerevan and Novosibirsk, where he earned two Ph.Ds (Yerevan Physics Institute, 1958; Budker Institute of Nuclear Physics, 1963). At Yerevan he headed the electro-magnetic interaction laboratory, designed the 5 GeV electron synchrotron, became a professor, and published pioneering works on nonlinear betatron oscillations (1956), synchro-betatron resonances (1957), radiation decrements (1958), and spin diffusion (1966). Permitted to work closer to Moscow, he joined the Institute of Terrestrial Magnetism (1972) but was fired for writing to Brezhnev in support of Andrei Sakharov and glasnost (1973). A founding member of the Soviet section of Amnesty International (1973) and founder of the first Helsinki human rights monitoring group (1976), he was arrested for "anti-Soviet agitation and propaganda" (1977). After 7 years in prison and strict-regime labor camp and 2 1/2 years in Siberian exile, he was deported to New York City. He immediately resumed human rights activity and then scientific work, authoring or co-authoring 230+ scientific publications and technical reports—ranging from the Muon g-2 to foundations of quantum mechanics—as Senior Scientist at Cornell University's Laboratory for Elementary-Particle Physics (1987-2008), visiting scientist at CERN (1988-89), consultant at Brookhaven National Laboratory (1998-2009), Professor of Physics at Cornell (2008-15; then Emeritus), and longtime member of the Muon g-2 and EDM collaborations. His memoir Dangerous Thoughts appeared in America (1991), Russia, Germany, France and Ukraine. In 1993 he became an American citizen, a member of the American Academy of Arts and Sciences, and a fellow of the American Physical Society. He received several honorary degrees, including Uppsala University (1990), and human rights awards, including the Carter-Menil Human Rights Prize (1986), the American Physical Society Nicholson Medal (1995), and the American Physical Society Andrei Sakharov Prize (2006). And he received with pleasure, shortly before his death at the age of 96, the news that he had received the 2021 Wilson Prize.