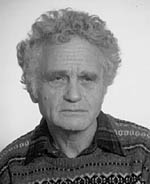 
"For uniting his love of physics with an intense dedication to international human rights; for his public espousal of openness and freedom in the face of severe personal consequences; for co-founding the Moscow chapter of Amnesty International and founding the first Helsinki Watch group; for helping establish Helsinki groups elsewhere in the Soviet Union; for his outspoken support of Andrei Sakharov; and for his continuing work for democratic principles in former-USSR countries, in China and in Bosnia. Yuri Orlov's commitment and accomplishments have inspired a generation of fighters for freedom worldwide."


Born in Moscow on August 13, 1924, Yuri Orlov passed his childhood in a Russian village, attended school in Moscow, and during World War II made T-34 tanks and served as an artillery officer. Returning to Moscow after the war, he finished high-school while working as a stoker and then entered the now legendary Physico-Technical Department of Moscow University, where he studied physics with Berestetsky, Budker, Kapitsa, Landau, and Landsberg, graduating in 1952. From 1953-56 he was a member of the Theoretical Department of the Institute of Theoretical and Experimental Physics in Moscow, where he worked on the design of ITEP's proton-synchrotron, developing the theory of non-linear betatron resonances -- the first time the Hamiltonian approach was used in this area.

In 1956, after speaking out in favor of democratization during a Communist Party meeting at ITEP, he was fired from ITEP by order of the Politburo, escaping arrest only at the intercession of Khrushchev himself. His Ph.D. defense and further publication were blocked for 2 1/2 years and a job in Moscow for 16 years.

After a period of unemployment during which he was supported by scientific colleagues and private tutoring, he began a 16-year association with the Yerevan Physics Institute in Armenia in 1956. There he did the theoretical design of the Yerevan electron-synchrotron; published papers on quantum radiation damping and excitation, spin resonances and spin depolarization; and became chief of the laboratory of electro-magnetic interaction. In 1963-64 he did parallel work at Budker's Institute in Novosibirsk, and in 1967 proposed a 100x100 GeV electron-positron collider -- an idea not accepted at the time. During this period he received his Candidate degree --"first" Ph.D. -- from Yerevan (1958) and Doctoral degree --"second" Ph.D. -- from Novosibirsk (1963); was elected Corresponding Member of the Armenian Academy of Sciences (1968) -- which secretly expelled him in 1979; and was elected professor (1970).

Shortly after returning to Moscow in 1972, he joined the dissident movement. A year later, after co-founding the Soviet Chapter of Amnesty International, and writing a letter to Brezhnev to support Sakharov and to argue for glasnost as well as economic reforms, he was fired from his research position at the Institute of Terrestrial Magnetism and Distribution of Radio- Waves, Moscow region. He was supported by free-lance editing and writing of scientific filmstrips and, once again, by funds from scientific colleagues and private tutoring. Despite an international reputation and authorship of over 50 scientific articles, he never again worked as a scientist in his country. In May 1976 he founded the Moscow Helsinki Group and helped establish similar groups elsewhere in the FSU, which proved to be the start of the international Helsinki human-rights monitoring movement. In February 1977 he was arrested by the KGB and sent to Lefortovo Prison for 12 months of 2 interrogations. After a three-day show trial, he was sentenced to 7 years' strict- regime labor camp and 5 years' exile for "anti-Soviet agitation and propaganda." In camp, he worked on a lathe, and wrote and smuggled out human rights documents and appeals, as well as three scientific papers later published in the West. In 1986, halfway through his Siberian exile, he was stripped of USSR citizenship and deported to the United States as part of the deal in which U.S. journalist Nicholas Daniloff was traded for a Soviet spy. Since 1987 he has been working at Cornell's Newman Laboratory as Senior Scientist (developing CESR and working on the foundations of quantum mechanics) and participating in the Brookhaven G-2 experiment. He spent 1988-89 as a visiting scientist at CERN. Also since arriving in the West, he has published scientific papers in journals and conference proceedings; articles on human rights and politics; and an autobiography, Dangerous Thoughts (which appeared in the US, R