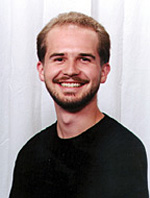 
Steven Oliver received his B.A. in physics from the University of California, Berkeley in December 1999 and as the top student in his graduating class received the 2000 Department Citation Award. He has returned to Berkeley as a National Science Foundation Graduate Research Fellow to pursue his Ph.D. As an undergraduate, he worked with Prof. David Weiss in experimental atomic physics. Specifically, he worked to push the limit of phase space densities attainable by laser cooling. This was achieved by developing new techniques that rely on the unique advantages of cooling atoms tightly bound in an optical lattice. These include Raman sideband cooling and spatial compression of atoms in one- and two-dimensional lattices.