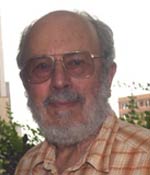 
"For outstanding contributions to theoretical relativity, including the Newman-Penrose formalism, Kerr-Newman solution, Heaven, and foliation theory. For his intellectual passion, generosity and honesty, which have inspired and represented a model for generations of relativists."

" Born: October 17, 1929, New York City.
" Graduate: Bronx High School of Science, 1947.
" B.A., New York University, 1951.
" M.A. & Ph.D, Syracuse University, 1955, 56.
" Instructor: University of Pittsburgh, 1956-59.
" Assistant Professor: University of Pittsburgh, 1959-62.
" Associate Professor: University of Pittsburgh,  1962-66.
" Professor: University of Pittsburgh, 1966-96.
" Professor; Emeritus, 1996-present
" Editorial Board: Journal of Mathematical Physics,
" Member: Governing board of International Society on General Relativity and  Gravitation,
" President: International Society on General Relativity and Gravitation, 1986-89.
" Chairman of the Scientific Organizing Committee:
International Conference on General Relativity, Pune, India, Dec. 1997.
The greatest scientific influences in his career were his interactions with his thesis advisor, Peter Bergmann, and his early meeting,  interaction, collaboration and friendship with Roger Penrose.
His paper with Penrose on the spin-coefficient formalism has been extremely influential. His research has centered on the properties of  objects; coordinates, tetrads, surfaces, geodesic congruences and their relationship to the Einstein field equations.  This has lead to new solutions, the theory of H-space and the reconstruction of space-time from surfaces - among other results.  He has remained active since retirement.  Since his retirement in 1996 he has published close to 30 papers.  His present interest lies in a strange relationship, seen via geodesic congruences, that exists between the asymptotic behavior of the gravitational field and equations of motions. Aside from his family, friends and physics, his interests have been in classical music and wilderness hiking  even into his 80s.