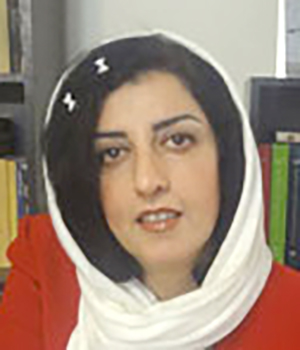 
"for her leadership in campaigning for peace, justice, and the abolition of the death penalty and for her unwavering efforts to promote the human rights and freedoms of the Iranian people, despite persecution that has forced her to suspend her scientific pursuits and endure lengthy incarceration."


Narges Mohammadi, an Iranian physicist, engineer, and human rights defender currently serving a 16-year sentence in Evin Prison (Tehran), was born in Zanjan in 1972. She majored in physics at Imam Khomeini University in Qazvin, where she became actively involved in promoting rights and social justice by founding a political student organization and publishing on issues related to women’s and students’ rights. After graduating, she worked both as an engineer with the Iran Engineering Inspection Corporation and as a journalist, highlighting issues related to gender equality. Ms. Mohammadi’s efforts to maintain a career in the sciences while speaking out about human rights abuses were unsuccessful. In 2009 she was dismissed from her position with the Engineering Inspection Corporation. The same year, she was arrested and incarcerated.

Ms. Mohammadi is known globally for her efforts to promote and protect the rights of women, prisoners of conscience, minority communities, and other vulnerable groups. She has also been deeply involved in efforts to promote free and fair elections and abolish the death penalty in her country. As spokesperson and vice-president of the Defenders of Human Rights Center (DHRC), an organization founded in 2001 by Nobel Peace Laureate Shirin Ebadi and other prominent Iranian lawyers, and closed by the government in 2008, Ms. Mohammadi helped to provide pro bono legal assistance to prisoners of conscience and monitor the human rights situation in Iran. She also served as president of the Executive Committee of the National Council of Peace in Iran, an organization dedicated to opposing military conflict and violence. Together with other human rights activists, she created the Women’s Civil Center, a body that defends the rights of women, political prisoners, and minorities. Her courageous actions in support of human rights have taken many forms, from protests before parliament concerning acid attacks on women to prison vigils with the families of individuals facing execution. Ms. Mohammadi is the recipient of the 2009 international Alexander Langer Award and the 2011 Per Anger Prize for human rights.