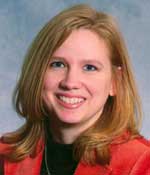 
"For her pioneering contributions to the observation of jet quenching and her continuing efforts to understand high- p_T phenomena in relativistic heavy- ion collisions."


Saskia Mioduszewski is an experimental nuclear physicist interested in ultra-relativistic heavy-ion collisions. She received her B.S. in physics and mathematics in 1994 from North Carolina State University and her Ph.D. in physics from the University of Tennessee. Starting as a Postdoctoral Research Associate in 2000, she worked at Brookhaven National Laboratory on the PHENIX Experiment at the Relativistic Heavy Ion Collider (RHIC). In 2005, she moved to Texas A&M University as an assistant professor and became a member of the STAR Collaboration at RHIC, where she continues to pursue her interest in high-energy heavy-ion collisions. Saskia is a member of the American Physical Society. Among her honors, she received the 2004 D.O.E. Presidential Early Career Award and was awarded an Alfred P. Sloan Fellowship in 2006.